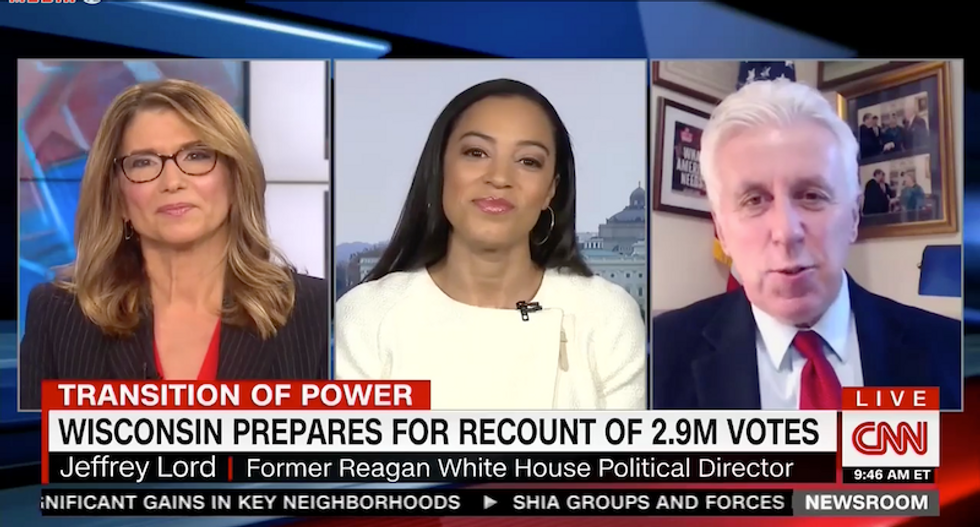 During a CNN panel on Monday morning, anchor Carol Costello was joined by commentators Angela Rye and Jeffrey Lord to discuss the voter recount efforts currently taking place in Wisconsin, Michigan, and Pennsylvania.

Commenting on the recount and Donald Trump echoing calls for a recount — even after winning the election — Costello asked, "This could just turn into an absolute mess, right?"

"The reality of it is that you have a candidate who is ahead in the popular vote by over 2.2 million votes at this point," Rye explained, referring to Democratic nominee Hillary Clinton.

Costello argued that even if the Wisconsin votes were wrong, Clinton still wouldn't win the Electoral College. Lord responded to Rye's commentary with laughter.

"Jeffrey we can laugh, but I think the reality of it is this is really troubling to us," Rye shot back. "Your candidate continues to push conspiracy theories."

"There's this tweet from the president-elect [about voter fraud in Virginia, New Hampshire, and California] and it's baseless," Costello agreed. "He won the election, like I'm not getting why he's tweeting this out!"

Lord came to the defense of his candidate, explaining that perhaps this is just Trump's "way of fighting back against this kind of nonsense." He added, "The American people are over it."

"What does Stein want?" Costello asked, "Because she can't possibly win."

"I think it's really simple," Rye responded. "I think that there are doubts in the minds of American voters [no matter their party affiliation]."

"If Donald Trump won fair and square, what harm does it do — I agree with Jeffrey — if he thinks that there's ground for a recount in some of the other states, then do it! He's alleging voter fraud."

Rye then insisted that what we should really be talking about is voter suppression.

Watch the full clip below via Mediaite.