WATCH: SNL's Alec Baldwin and Kate McKinnon are just as sick of this election as you are 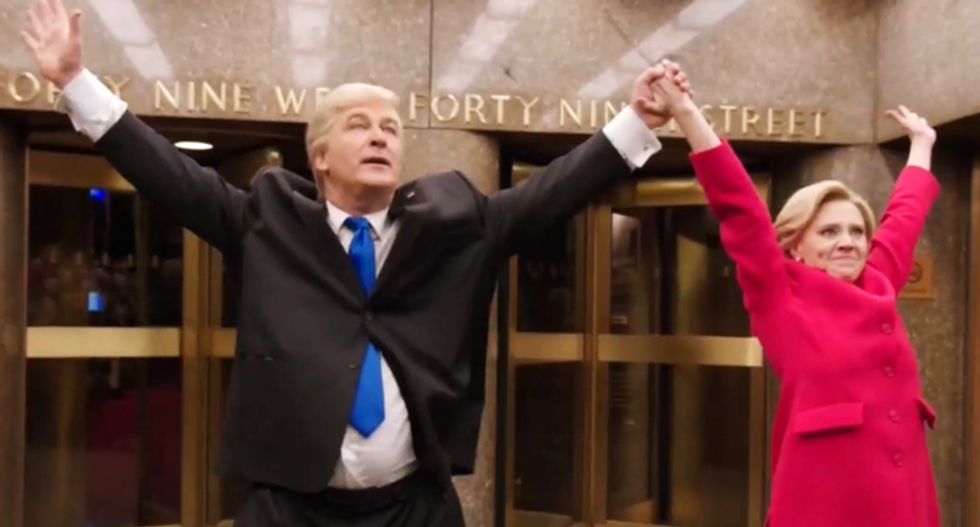 Alec Baldwin returned to reprise his role as Donald Trump and Kate McKinnon returned as Hillary Clinton in this week's Saturday Night Live in a joint interview with as Erin Burnett.

Trump was asked how he manages to keep up the energy to do so many campaign stops per day.

"My deep love for America and a really, really big handful of uppers that were meant for race horses," Trump replied.

The topic of Clinton's emails came up.

"These emails are very bad for you, Hillary," Trump said, which is why he uses Twitter, a website where he can write things that no one will ever read.

"Mr. Trump, everyone can see your tweets," said Burnett.

"Really? And I'm still in this thing? America, you must really hate this lady," said Trump.

When Burnett suggested that forces in the FBI might be behind the leak of emails intended to damage Clinton's campaign, Trump replied that's ridiculous, then kissed an FBI agent on the lips.

"Let's get back to your emails," said Burnett.

And then when the topic of the KKK's endorsement came up, a Klansman emerged from the wings to peck Trump in the lips.

"Can we talk about how he kissed the KKK?" Clinton asked.

"Yeah, but we're almost out of time," Burnett said. "Let's get back to your emails."

Then after going after each other for a moment, the two candidates paused.

"Don't you guys feel kinda gross about all this?" Trump asked the audience, before he and Clinton fled out of the studio and into the New York street to kiss and hug people on the sidewalk.

The two returned to the studio and urged Americans to vote on Tuesday, no matter who they're voting for.