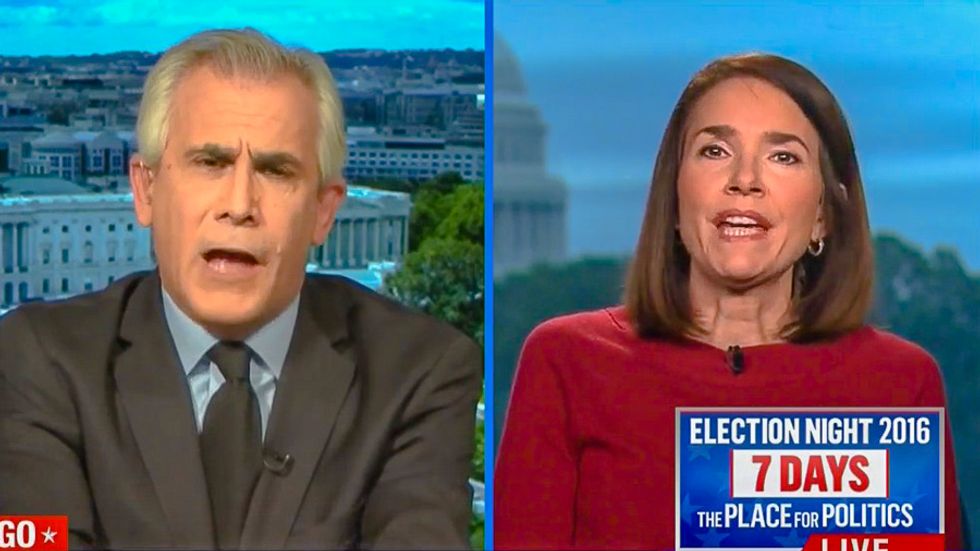 Mother Jones reporter David Corn on Tuesday defended evidence that Russia was blackmailing Donald Trump after he was "compromised" during visits to Moscow.

In an article published on Tuesday, Corn detailed Trump's troubling ties to Russia, including allegations by a "veteran spy" that the U.S. government is investigating whether Russian intelligence sources had tried to curate a secret relationship with Trump.

"Russian regime has been cultivating, supporting and assisting TRUMP for at least 5 years. Aim, endorsed by PUTIN, has been to encourage splits and divisions in western alliance," Corn's source reportedly informed the FBI in a memo.

[The memo] maintained that Trump "and his inner circle have accepted a regular flow of intelligence from the Kremlin, including on his Democratic and other political rivals." It claimed that Russian intelligence had "compromised" Trump during his visits to Moscow and could "blackmail him." It also reported that Russian intelligence had compiled a dossier on Hillary Clinton based on "bugged conversations she had on various visits to Russia and intercepted phone calls."

"I met this former senior intelligence officer, who is really an expert and specialist in Russian counterintelligence for an intelligence service that we all would respect," Corn explained. "And learned that he had been sending very detailed memos to the FBI throughout much of the summer based on his own work that he did with Russian sources indicating that there had been a Russian operation for a couple years now to co-opt and cultivate Donald Trump."

"And he believes," Corn continued, "that this was a subject matter that [the FBI was] keenly interested in."

Ferrechio dismissed the allegations as "unsourced" and "vague".

"The fact is the FBI has said they have found no direct link whatsoever after they've done an investigation," Ferrechio insisted. "In fact, what they think is at play here is the Russian government wants to upset our very democracy and they really don't care who wins the election. They just want to show that they can pull this off."

According to the right-leaning reporter, Russians have confined their leaks of stolen information to Hillary Clinton because "they don't have a lot on Donald Trump."

"The veteran spy who I talk about in my story, he has no beef with Trump, he has no interest in helping Hillary Clinton," Corn said. "He's a foreigner, he's been an intelligence professional for decades for another service."

"Well, you are very trusting," Ferrechio quipped. "The fact is everybody is fighting a political game here. All of these sources on both sides have their own agenda."

"You don't know this person," Corn replied. "You are casting aspersions [and] if you want to do that theoretically, go ahead. But don't tell me you know anything about this because you obviously don't. And if Republicans want to say and you want to say that it's just a coincidence that the Russians are hacking Hillary Clinton and the Democrats and they have no dog in this fight and that Donald Trump has been responsible in response to these actions, go ahead. But we do have tremendous evidence of a Russian campaign through hacking to influence this election."

"It seems like you can't handle the truth here," he added. "If you want to say that it's a coincidence... It's helping one candidate. And that's a candidate who is very helpful to Putin."