Bernie Sanders rips Trump for breaking promises to struggling workers: 'I don’t think he was sincere' 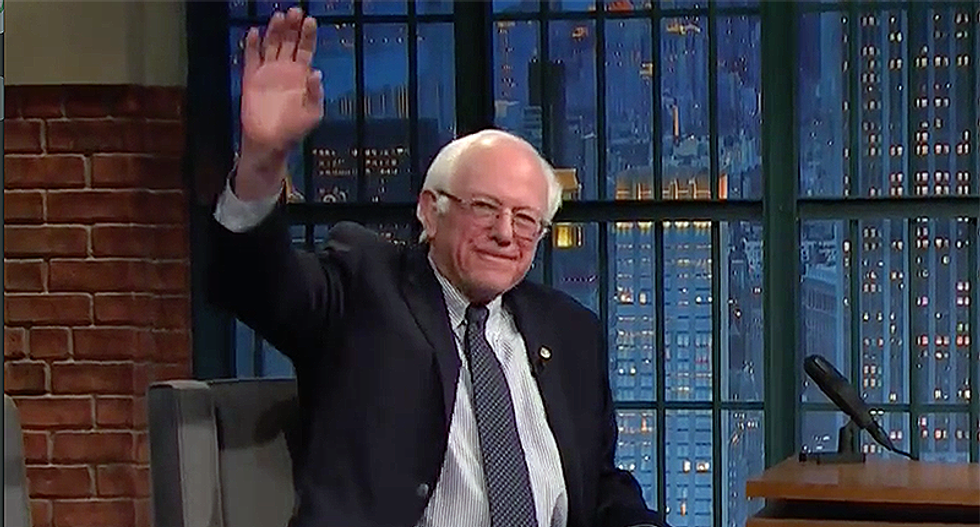 Bernie Sanders is not happy about Donald Trump's appointments to his cabinet. The president-elect told his voters that he would ensure they had jobs and tax cuts, but many are now speculating it will be business as usual for the GOP. Sanders explained to "Late Night" host Seth Meyers that it's because Trump is not exactly known for being "scrupulously honest."

Prescription drug prices are soaring, people can't afford medicine, some people are dying because drugs are too expensive; these are all problems Sanders sees as fixable if the new president-elect chose to.

"He said, 'I'm going to take on the drug companies,'" Sanders recalled. "Well, Mr. Trump, we're going to work with you, if you keep your word. But the point is you can't make statements in a campaign and then the day after the election, forget."

Earlier in the show, Meyers noted that Sanders will be standing up for working people and that he's anti-establishment.

"If the cabinet that he appointed of billionaires and millionaires is anti-establishment, boy I would hate to see what the establishment looks like," Sanders quipped.

They discussed the fact that many of the swing voters were people who voted for President Obama twice and then switched to Trump. "They're not racists," Meyers said. Sanders agreed, explaining that people are hurting in the existing economy that prioritizes the rich over the not-so-rich.

"This is maybe the most important point that I want to make," Sanders said, noting that the media isn't talking about this as a topic. "There are a lot of people in this country who are hurting, who are in a lot of pain tonight. There are people who are 55 years of age who have zero amount of dollars in the bank as they await retirement. Half of the elderly workers in this country have nothing in the bank. There are young people who graduate college $50,000 in debt and are making $14,000 a year. There are 28 million people who have no health insurance. There are others who are seeing their healthcare costs soar, their prescription drugs soar."

Sanders continued, saying that there were people with decent factory jobs, but those factories moved overseas, so now the people are stuck working at Walmart for $10 an hour desperately trying to get by. However, folks aren't necessarily worried about themselves, but rather their children, who are going to be trapped in this status.

Trump tapped into all of these topics, Sanders explained. "He said, 'I hear you and I'm going to do something about it.' Well, between you and me, I don't think he was honest. Maybe I'm wrong. I don't think he was sincere. But he tapped that pain that people were feeling. And what we have got to do is to stand up for those people, and what we have to do, is get to the causes of those economic problems, which in my view, has a lot to do with the greed of and corporate America, whose greed is destroying the middle class of this country."

Sanders also noted that it's a little strange for someone who has been such an outsider to now suddenly be a leader in the Democratic Party.

"I think the reason for that has a lot to do with the fact that we generated a whole lot of excitement in our campaign from you people who really want to bring about profound change in this country," Sanders noted. "And they are prepared to work for that. And I think the Democratic leadership understands that we need to bring those people into the party. We need to transform the party. We need to make the Democratic Party a democratic party with a small d. So, all of you, come on in. We need your help."

Sanders said that there is a chance Trump could succeed, but only if he keeps all of these campaign promises and helps bring back jobs from overseas, raises wages and helps Americans in all areas of the country have a better life. He noted that Trump said he wants to get rid of the Affordable Care Act, but that would mean throwing 20 million to 30 million people off of their health insurance at a time when people are already struggling with their health care costs.

He did note that he would be unwilling to work with Trump if he's going to spew bigotry, xenophobia, homophobia and hate. "We can't compromise one inch on bigotry," he said.

Sanders noted that he wants to keep young people engaged and inspired in the process and that's what his latest book is about.

"We have got to be active in the political process in a way that we have never been before in our lives. We have got to rethink what democracy means," Sanders said, recalling the fights for women's rights, civil rights and gay rights. "People organized and stood up. Here is the truth. Trump can propose anything he wants, but he will not succeed in ugly decisions. If millions of people stand up and fight back, and tell him that is not what America is."