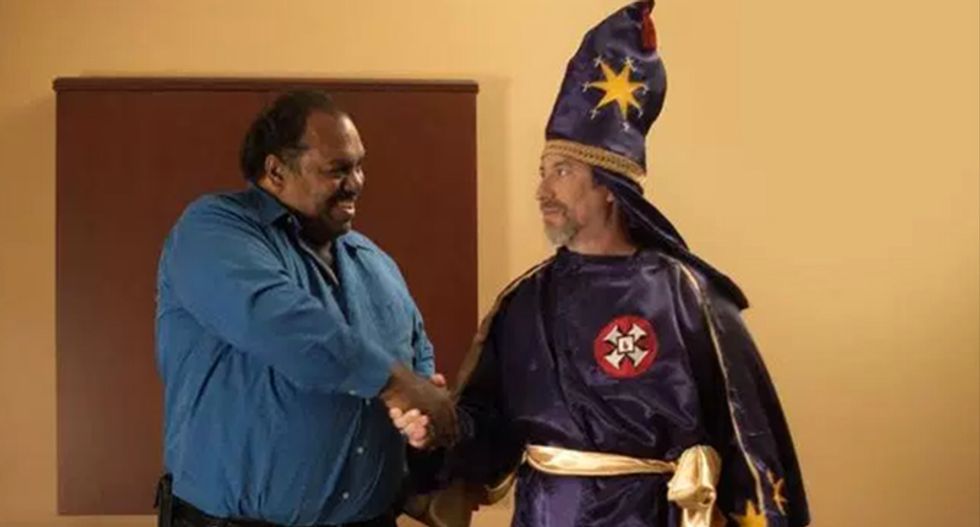 Actor and blues musician Daryl Davis traveled all over the country for nearly 30 years but not to play music — to convert white supremacists.

In a new documentary "Accidental Courtesy: Daryl Davis, Race & America," Davis shows some of the former members of the Ku Klux Klan that he has befriended over the last decades. You heard that correctly: Befriended. The piano player crafted his relationships around conversations about music for the new film, The Daily Mail reported. He's played with Chuck Berry, Jerry Lee Lewis and Bruce Hornsby. He's even played alongside former President Bill Clinton playing the saxophone.

“Music absolutely played a massive role in bridging many gaps in the racial divides I would encounter,” Davis said. He explained that he was able to win the men over with his talent.

That isn't how it began, however. Davis confessed in his 1998 book Klan-destine Relationships: A Black Man’s Odyssey in the Ku Klux Klan that he was in many physical fights with members of the KKK. He says that he won most of them.

Instead of screaming and fighting, Davis decided to take another route.

“I simply gave them a chance to get to know me and treat them the way I want to be treated," he explained. “They come to their own conclusion that this ideology is no longer for them. It’s a wonderful thing when you see a light bulb pop on in their heads or they call you and tell you they are quitting.”

He said that he never sought out to change hearts and minds. He never even thought he would convert a Klan member. He simply sought to find answers from white supremacists. He asked them all, "How can you hate me when you don’t even know me?"

This year has been filled with arguments surrounding the empowerment of the white nationalist movement. President-elect Donald Trump attacked many different groups of people of color and promoted images on social media that came from white nationalist sites. Following Election Day, Raw Story cataloged hundreds of incidents of Trump-related attacks on women and people of color.

You can see the trailer below: