Blaming the victim: Sean Spicer says 'responsibility' for getting hacked is on DNC, not Russia 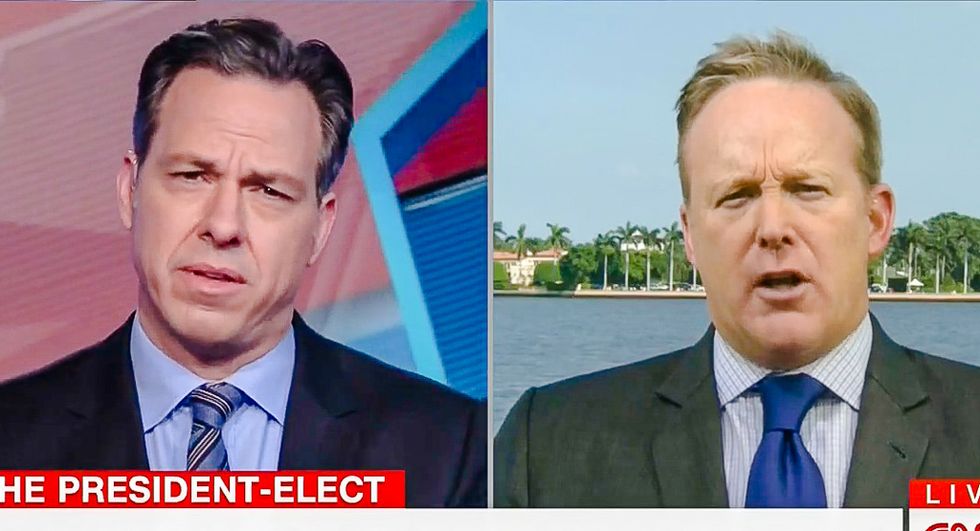 Incoming Trump administration Press Secretary Sean Spicer on Thursday urged the media to stop blaming Russia for stealing campaign emails and instead place the "responsibility" on the Democratic National Committee.

Spicer told CNN's Jake Tapper that Democrats were focusing on the so-called Russian hacking of DNC emails in an effort to undermine Trump's election. And he said that intelligence officials should stop speaking about the matter unless they were willing to reveal sources and methods.

"We need to have the intelligence community come forward publicly and on the record and make it clear exactly how this happened and who was responsible," Spicer insisted. "Right now we have un-sourced media accounts for what the activity is. And I think that's not acceptable."

"I don't understand why it needs to be public," Tapper replied. "President-elect Trump gets these intelligence briefings. Presumably he's being told why the intelligence community feels the way it does."

Spicer suggested that Trump would not accept evidence from the briefings until intelligence community was "willing to come out publicly."

"At what point is it incumbent on you guys in the media to ask the DNC, what measures did they take to protect this?" Spicer pivoted. "Because it seems to me as though there's [not] a lot of talk about the DNC not doing what they should have done to protect their own network servers."

The future press secretary acknowledged that "any attempt to hack or do anything nefarious is wrong and illegal."

"But at some point, the question hasn't even been asked of the DNC, 'Did you take basic measures to protect the data that was on there?'" Spicer charged. "No one wrote those emails, no one put a private server on there and no one seems to have done the due diligence at the DNC to protect their own system."

"I don't think there is any question they did a horrible job," Tapper agreed.

"No, but have you ever asked the question of anyone at the DNC?" Spicer shot back. "Where's the responsibility of them to protect their system?"

"Nobody by any way or shape is suggesting that that's acceptable behavior," he added. "But I don't believe once I've ever seen an interview where anyone at the DNC was ever asked a question about whether they take any responsibility for what clearly appears to be a lax effort on them to protect their own networks."

"Well, when they come out from under their desks, I'll be sure to ask them," Tapper quipped.

On Thursday, the Obama administration revealed the names of at least four top Russian military officers who were believed to have ordered the theft of DNC emails as part of an effort to influence the 2016 election. The White House said it was responding with sanctions and by expelling 35 Russian diplomats.

According to The New York Times, further evidence of the Russian operation was expected to be released by U.S. intelligence agencies in coming days.