'Bullsh*t hatred cover to cover': Vandals deface Korans and books about Islam in libraries across US 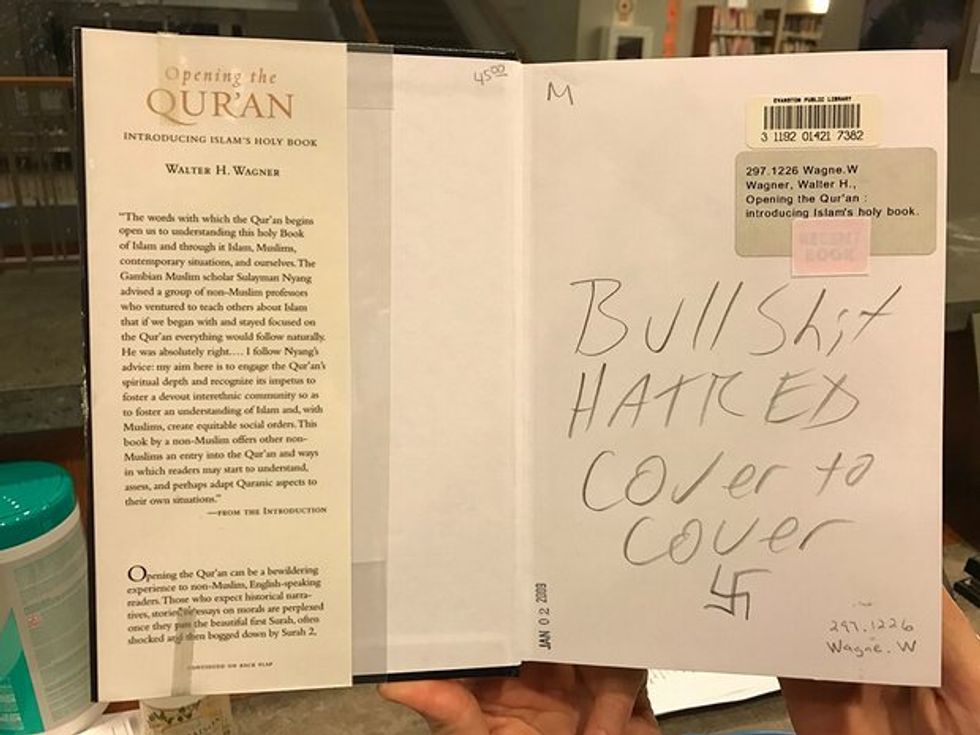 A defaced textbook about the Koran from the Evanston, IL public library (Facebook.com)

A number of libraries across the U.S. say that they have seen an increased number of anti-Muslim acts of vandalism and hate speech in the wake of the election of Republican candidate Donald Trump.

The Guardian reported Monday on a survey by the American Libraries Association (ALA), which found that copies of the Koran and books about Islam have been defaced with swastikas and other hate speech at a number of libraries.

The worst incident so far, the Guardian said, was an attack on a Muslim student in which a man tried to forcibly remove her hijab.

Four days after the election, the BBC said, a Muslim student said she was studying at the University of New Mexico library when a man in a Trump shirt tried to pull off her hijab, the scarf women of certain Islamic sects wear over their hair.

"I told him that he has every right to believe what he wants and he can say whatever he wants but as soon as he puts his hands on me, then things get serious," the student told BBC Trending. "He then walked away saying 'I'm going to sit down before you throw a grenade at me.'"

In Oregon and Illinois, libraries are reporting defaced books and hateful graffiti.

An Evanston, Illinois vandal was particularly busy, defacing seven books and adding "swastikas and comments about the prophet Muhammad in a copy of The Koran for Dummies, copies of the Qur’an, textbooks and conservative commentator Glenn Beck’s It’s All About Islam."

• A student at the University of New Mexico was studying in the school’s library when she was approached by a man who tried to remove her hijab, the BBC reported. She evaded her attacker and was not injured.

• Administrators at Reed College in Portland, Ore., discovered hateful, threatening messages and swastikas on the walls of the college’s library, KOIN 6 reported.

• Anti-Semitic graffiti was scrawled on the window of a library branch in Toronto, CBC News reported.

"These crimes -- from defacing library materials in public libraries to offensive graffiti on the walls of academic libraries -- have begun to mirror the divisive rhetoric of this campaign season,” said ALA president Julie Todaro.

She continued, "While libraries have always reported on a wide variety of crimes, and we have always had serious incidents of defacing library materials and graffiti, we are just now beginning to hear of many more specific instances of incidents of bigotry and harassment within libraries.”

This is unacceptable, she said. Public libraries are meant to be wellsprings of "diversity, unity and inclusion."