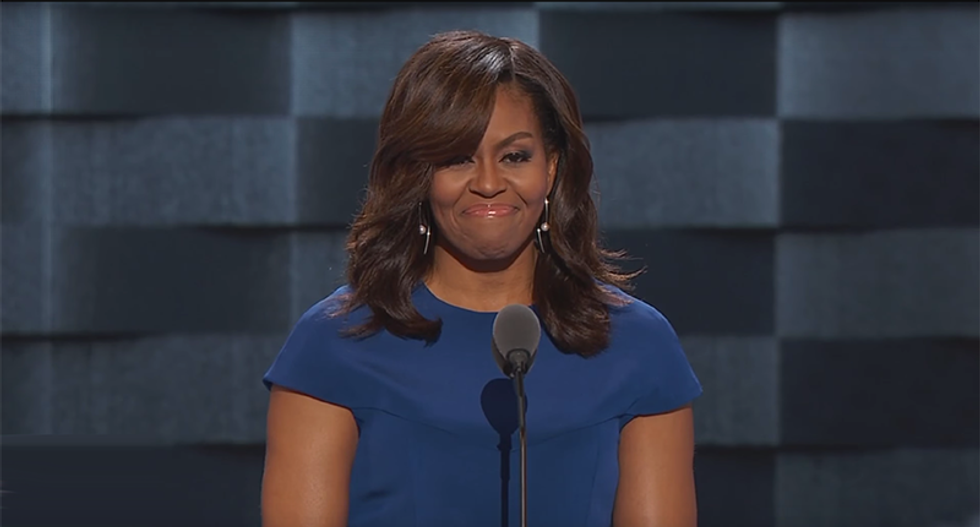 The Colorado doctor who came under fire this week for calling First Lady Michelle Obama a "monkey face" who speaks "poor ebonic English" has resigned from her job as a pediatric anesthesiologist.

The New York Daily News reported Saturday that Dr. Michelle Herren stepped down from her position at Denver Health Medical Center after her racist comments on Facebook kicked off a firestorm of controversy.

This is the second post she has lost since the remarks became public. Earlier this week, she was fired from her teaching position at the University of Colorado Denver School of Medicine.

Herren was responding to a Facebook post about Michelle Obama's eloquence as a public speaker and the pedigree of the First Lady's Princeton and Harvard education when Herren wrote, "Doesn’t seem to be speaking too eloquently here, thank god we can’t hear her!” She then added, “Harvard??? That’s a place for ‘entitled’ folks said all the liberals!”

Herren's friend JoAnn Nieto saw the comments and was disgusted.

"It really outraged me to see that she works at Denver Health, which serves a huge minority population,” Nieto said.

Herren's comments following the first were even worse.

“Monkey face and poor ebonic English!!! There! I feel better and am still not racist!!! Just calling it like it is!” she said.

Since the comments went viral, Herren has claimed that she was taken out of context and had no idea that calling a black woman a monkey was racist at all.

Denver Health suspended Herren as soon as they were informed about the racist comments, prohibiting her from treating patients or providing anesthesia.

On Friday, she formally resigned. A press release from the hospital said that Herren and the administrators "mutually agreed" to go their separate ways.

Since Nov. 8, a number of public officials have made their disdain for Mrs. Obama clear, often in the crude, racially offensive ways.

In West Virginia, Clay County mayor Pamela Taylor wrote, “It will be refreshing to have a classy, beautiful, dignified First Lady in the White House,” referring to Melania Trump. “I’m tired of seeing an ape in heels.”

She has since stepped down.