Ex-Clinton aide rips into Trump supporter over Dem resistance: 'Don't tell me he has a mandate!' 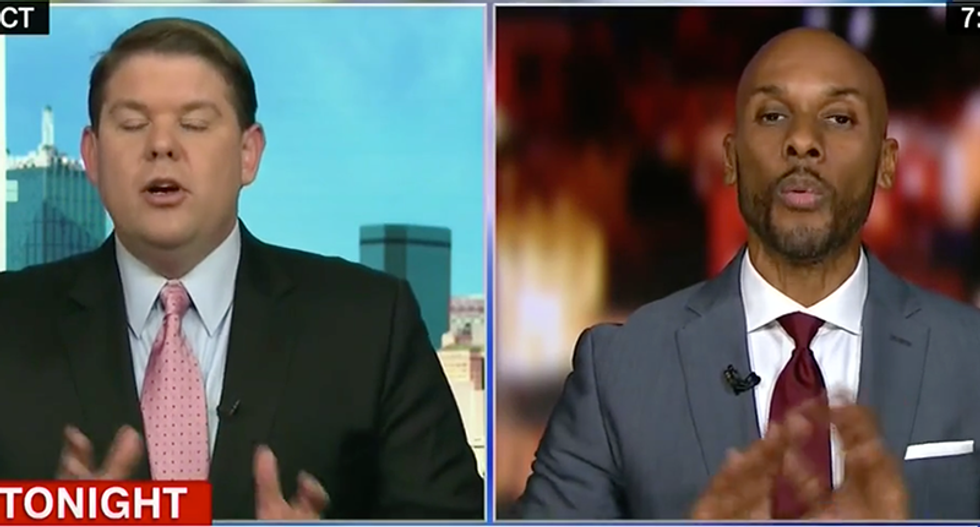 Ben Ferguson and Keith Boykin battle it out on CNN (Photo: Screen capture)

A CNN segment between conservative commentator Ben Ferguson and former Bill Clinton white house aide Keith Boykin derailed Thursday over whether states can fight back against a Donald Trump administration, with Boykin arguing that Democrats have every right to hold a Republican-led government accountable.

Boykin noted there were Republicans during Obama’s presidency who voted 60 times to repeal Obamacare and threatened to defund the federal government, noting the unprecedented power grab by Gov. Pat McCrory (R-NC) to weaken his Democratic successor Roy Cooper shows a “pattern of obstructionism” on the part of Republicans.

“Democrats have to fight back,” Boykin argued.

Ferguson called Boykin’s advice “a huge mistake” arguing vows by representatives in largely blue states like California to fight back against Trump is “putting them at risk of losing out at federal funding.”

“If California wants to not have federal funds coming in, that's fine we me,” Ferguson said. “That is more money that will be kept out there for other states that are willing to comply with the actual laws of the land. and you're advocating for law breaking because you're not going to enforce the laws of the federal government.”

Ferguson went on to argue Democrats “lost the election making the argument” Boykin just made.

“I hope that they keep doing this,” Ferguson said. “I hope they keep picking battles with Donald Trump … because it's only going to allow them to continue to lose elections moving forward.”

Boykin reminded Ferguson that while Trump won the electoral college, he lost the popular vote by 2.9 million and lost California in a landslide.

“Don't tell me that he has a mandate when the majority of american people [voted for Clinton],” Boykin said

A back-and-forth ensued between Boykin and Ferguson over California’s contributions to the U.S. Boykin noted the state actually sends out more money than states like Kentucky and Alabama. In fact, California comprises 13.3 percent of the U.S. economy and is the fifth least-dependent state in the country.

“Donald Trump is the one attacking the states,” Boykin reminded him. “He said that California and New York essentially don't count.

Watch the whole video below, via CNN: