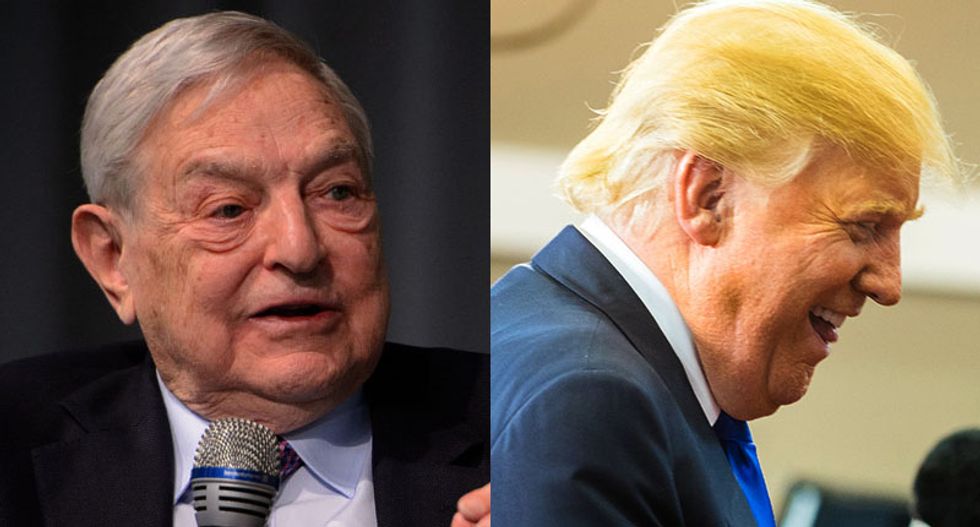 TheHill.com reported that Soros penned a scorching op-ed column for Project Syndicate in which he lamented the effect that a Donald Trump presidency will have on freedom and human rights both domestically and abroad.

“Democracy is now in crisis” around the world, wrote Soros. "Even the U.S., the world’s leading democracy, elected a con artist and would-be dictator as its president.”

"I am an 86-year-old Hungarian Jew who became a US citizen after the end of World War II," he explained. "I learned at an early age how important it is what kind of political regime prevails. The formative experience of my life was the occupation of Hungary by Hitler’s Germany in 1944. I probably would have perished had my father not understood the gravity of the situation. He arranged false identities for his family and for many other Jews; with his help, most survived."

He went on, "I find the current moment in history very painful. Open societies are in crisis, and various forms of closed societies -- from fascist dictatorships to mafia states -- are on the rise. How could this happen? The only explanation I can find is that elected leaders failed to meet voters’ legitimate expectations and aspirations and that this failure led electorates to become disenchanted with the prevailing versions of democracy and capitalism. Quite simply, many people felt that the elites had stolen their democracy."

The U.S. has now elected Donald Trump to the highest office in the land in spite of his loss of the popular vote by nearly 3 million. Soros sees Trump as under-informed, unqualified and truly dangerous.

"Although Trump has toned down his rhetoric since he was elected," Soros said, "he has changed neither his behavior nor his advisers. His cabinet comprises incompetent extremists and retired generals."

The situation is not hopeless, he said.

"I am confident that democracy will prove resilient in the US. Its Constitution and institutions, including the fourth estate, are strong enough to resist the excesses of the executive branch, thus preventing a would-be dictator from becoming an actual one," Soros wrote.

"But the US will be preoccupied with internal struggles in the near future, and targeted minorities will suffer," he said. "The US will be unable to protect and promote democracy in the rest of the world. On the contrary, Trump will have greater affinity with dictators. That will allow some of them to reach an accommodation with the US, and others to carry on without interference. Trump will prefer making deals to defending principles. Unfortunately, that will be popular with his core constituency."

Soros said that he is particularly concerned about the EU, which is now being menaced by the machinations of Russian president Vladimir Putin even as it is overwhelmed with the influx of refugees from war-torn regions of the world.

"With economic growth lagging and the refugee crisis out of control, the EU is on the verge of breakdown and is set to undergo an experience similar to that of the Soviet Union in the early 1990s. Those who believe that the EU needs to be saved in order to be reinvented must do whatever they can to bring about a better outcome," he said.