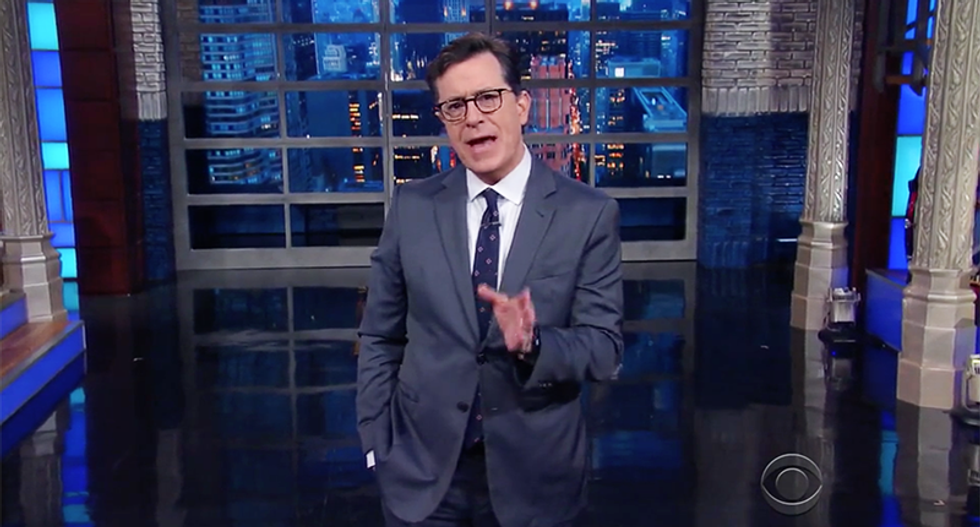 Stephen Colbert Wednesday hammered the conspiracy theorists who rose to prominence during the 2016 election, suggesting Wikileaks, Alex Jones and Reddit trolls should “grow the f*ck up.”

The Late Show host then tore into the conspiracy theory that prompted a North Carolina man to drive to Washington DC and pull his gun in a local pizza store, tracing the origin of “pizzagate” to “alt-right” articles culled from hacked DNC emails published through Wikileaks.

Colbert then revealed that, at least “according to some folks on Reddit,” he’s a part of “pizzagate.”

“This is insane: I have no part in the ‘pizzagate conspiracy’—is what they want me to say,” Colbert joked, adding “Da Vinci chodes” found out he is “on the Clinton payroll.” Referring to a rant by renowned conspiracy theorist Alex Jones lamenting that late night shows are rehearsed, Colbert admitted, “you got me.”

“Oh my god!” Colbert exclaimed. “We’re in it for the money. It’s like these shows are some kind of… business.”

“Here’s what these conspiracy theorists don’t get: there’s a difference between a conspiracy and an agreement,” Colbert said, holding up transcripts from the conversation he had with Donald Trump’s team prior to the president-elect’s own appearance on Late Night. “A conspiracy is what villains do. An agreement is what adults do.”

“Look around the country, wouldn’t you agree we need more adults?” Colbert added. ”So Wikileaks, Alex Jones, and these subreddit sub-geniuses, and I mean this in the nicest way possible: Grow the f*ck up.”