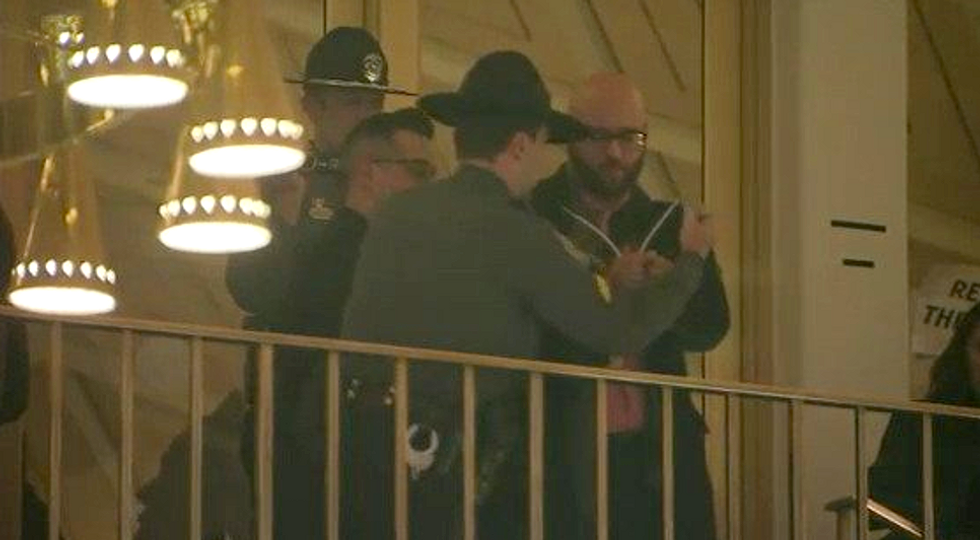 A journalist for North Carolina Policy Watch was among at least 16 arrested Thursday at the North Carolina Legislative Building after protestors disrupted the state House and Senate during what watchdog groups are dubbing a “shameful” and “deceitful” special session, WRAL reports.

The special session, convened Wednesday under the guise of providing aide to victims of Hurricane Mathew, morphed into what Democrats are calling a “power grab” after the late-night meeting resulted in 28 proposed bill, including two that would explicitly limit governor-elect Roy Cooper’s authority when he takes office in January. Among the proposed bills is SB4, which would reshape the state board of elections, limiting Cooper’s power regarding electoral oversight. Another is HB17, which would require Senate confirmation for the governor’s cabinet appointments, and make 1,200 workers appointed by current Governor Pat McCrory permanent state employees. "This is a power grab. Call it what it is," Sen. Floyd McKissick (D-Durham) said about SB4. "If McCrory had won, would we be here today?” Democrats and watchdog groups warn the special session is a clear attempt by North Caorlina Republicans to undermine Cooper after a hard-fought election which McCrory was reluctant to concede. “These shameful partisan tricks undermine the will of North Carolina voters, waste precious taxpayer dollars, and will further erode the public’s trust in our state government,” ACLU-NC executive director Karen Anderson said in a statement. As the special session continued into Thursday, protestors chanting "all political power comes from the people” disrupted the North Carolina General Assembly. Officials told protestors to clear the building, threatening them with arrest if they failed to comply.

Among those arrested was Joe Killian, an investigative reporter for NC Policy Watch, who live-tweeted his arrest.

Now being told to leave. Am told this includes media and I'll be arrested if I don't leave. Politely said they'll have to arrest me. #NCPol
— JoekillianPW (@JoekillianPW)1481838982.0

Will continue live-tweeting as long as I can. Looks like I'll be arrested shortly. #NCPol
— JoekillianPW (@JoekillianPW)1481839027.0

In a joint statement, NC Justice Center Executive Director Rick Glazieer and NC Policy Watch Director Chris Fitzsimon said they were sure the judicial process would “find our reporter was simply exercising his right to cover the news as it was unfolding in front of him.”

“He was simply covering the incident and was arrested when he refused to stop covering the news,” the statement reads.

Watch the video below, via WRAL: