Kellyanne Conway defends Tillerson's Russia ties: 'It's not like he's pounding down vodka with Putin' 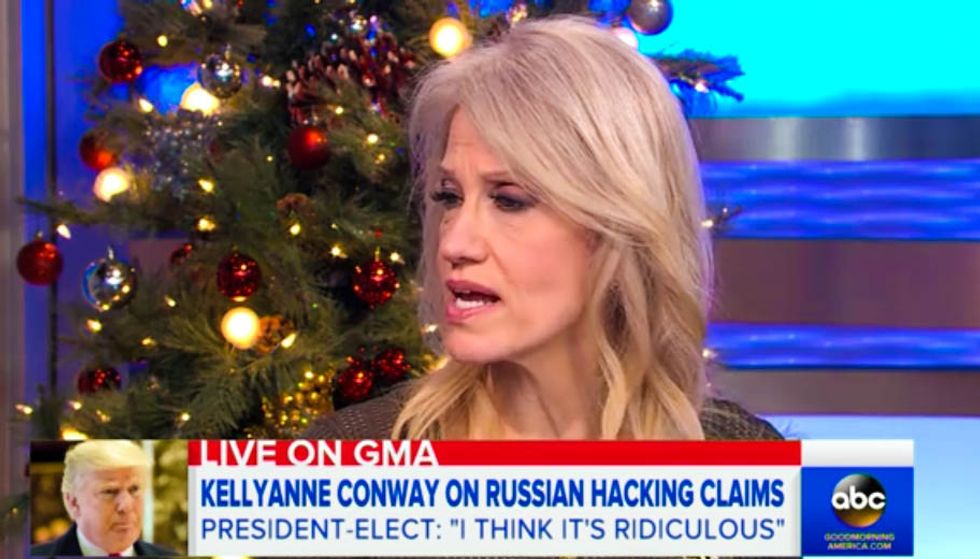 Former Trump campaign manager Kellyanne Conway went on Good Morning America on Monday to defend Rex Tillerson, her boss's potential pick for Secretary of State, who has come under fire for his ties to the Russian government.

While Conway acknowledged that Tillerson has had multiple dealings with Russian President Vladimir Putin over the years, she said that this was a positive quality, as he could work to help make deals with Russia on the American people's behalf.

"Rex Tillerson has dealt with Russia for many years," she said. "It's not like he's pounding down vodka with Vladimir Putin at the local bar, but he's dealt with him in a business context. And we know we don't have a good relationship with many countries around the globe, including Russia. If, as Secretary of State, Mr. Tillerson -- or whomever the president-elect chooses this week -- if he can go ahead and improve U.S. relationships and advance U.S. interests, and advance the Trump doctrine, then we should all welcome that."

Conway, however, predicted that they would come aboard once they realized he had America's best interests at heart.

"I know that Senators McCain and Rubio will ultimately see Mr. Tillerson as somebody who's advancing U.S. interests," she said.