"I mean, Duffy, besides being a member of Congress, is also part of the transition team," Professor Ed Miller said. "So, you just don't say that."

During his appearance on Tucker Carlson Tonight, Duffy discussed the state's presidential recount efforts. "We only have one county that's hand counting the votes," he said, noting that the county was Dane County, home of Madison.

He called the Madison-area a "progressive liberal Communist community," and added, "they're taking as long as they can [with the recount]."

Duffy then suggested that Democrats "don't believe in Democracy and freedom and free elections. They want to use politics to undermine the will of the voter," noting that Wisconsin went red for the first time since 1984.

Madison's Mayor Paul Soglin also responded to Duffy's comments, and not in the kindest terms. "For years I’ve been listening to morons like Representative Duffy, who are resentful of the fact that Madison is Wisconsin’s economic engine," he said.

The mayor apologized for using the term "moron" to define the Wisconsin representative in a statement released by his office on Thursday. Instead, he said, "I should have said he is a liar and a charlatan." 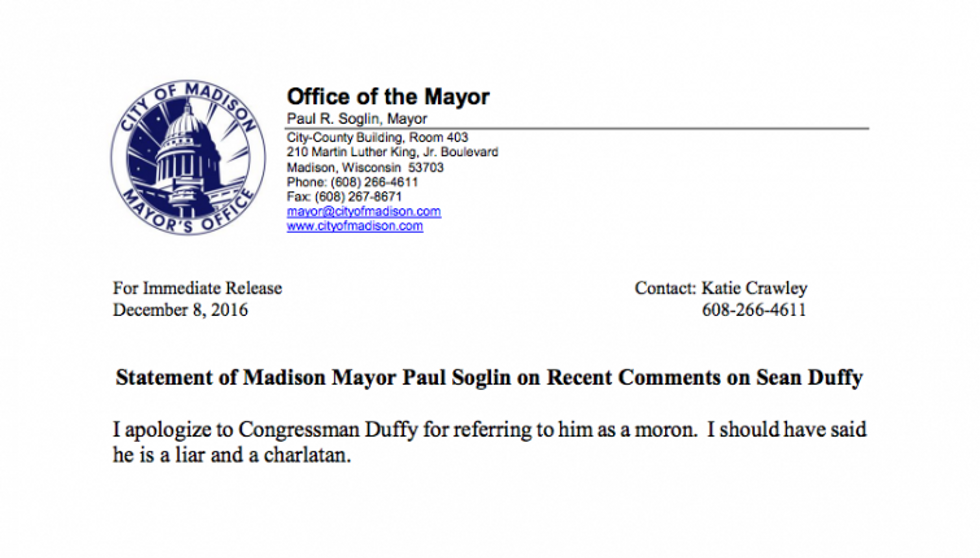 Duffy responded to his critics in a tweet that he posted on Wednesday. He wrote, "The PC crowd is humorless. For those offended by my "communist" comment, I'll send a therapy dog to your "safe place" of choice in Madison."

The PC crowd is humorless. For those offended by my "communist" comment, I'll send a therapy dog to your "safe place" of choice in Madison.
— Sean Duffy (@Sean Duffy)1481146177.0

Interestingly enough, Duffy — who is now making fun of "PC culture" and "safe places" — also called for the theatre to be a "safe space" for all people after Vice president-elect Mike Pence was booed and lectured during a showing of Hamilton.