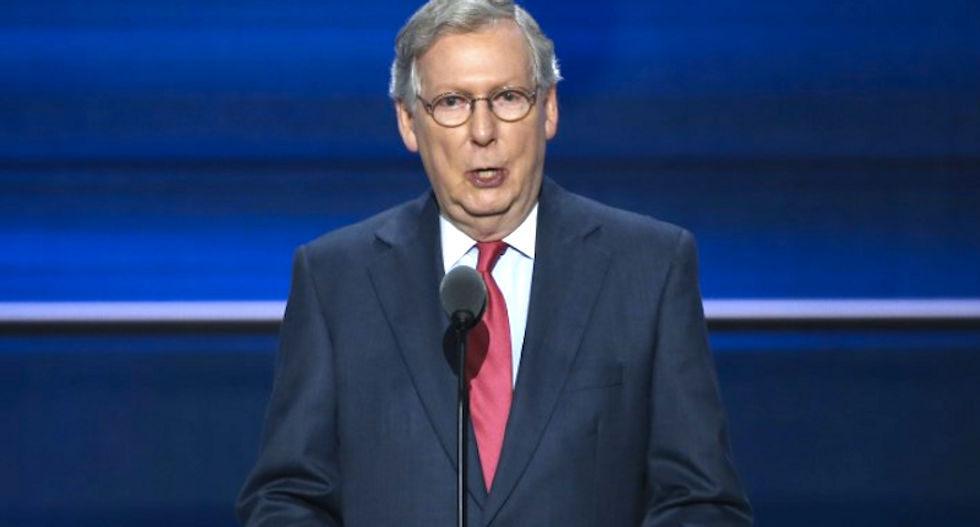 The Senate's top Republican broke with President-elect Donald Trump on Monday over whether Russian hacking during the U.S. election merited closer scrutiny, a fissure between Trump and his party that appeared to grow as lawmakers pressed for a special investigation into the matter.

The divide raised the possibility of enduring clashes between Trump and Republicans during his presidency over how to handle Russian President Vladimir Putin, a leader long viewed by many in the party as a calculating, untrustworthy foe but whom Trump has repeatedly praised for his leadership.

"The Russians are not our friends," Senate Majority Leader Mitch McConnell told a news conference.

"Any foreign breach of our cyber security measures is disturbing, and I strongly condemn any such efforts," McConnell said. "This simply cannot be a partisan issue."

McConnell said it "defies belief" that Republicans would be reluctant to investigate Russian actions.

McConnell's remarks contrasted with those of Trump and his staff, who scoffed at reports that the CIA had concluded the hacks and leaks of Democratic emails were carried out with the goal of helping Trump defeat Democrat Hillary Clinton. Trump said the conclusion was "ridiculous."

Some lawmakers have called for a special committee to investigate the hacking, but McConnell did not back that idea, saying he has confidence in the Senate Intelligence and Armed Services committees. Cory Gardner, a Republican, said the Russian hacking reflected the need for a permanent committee dedicated to cyber security.

It was not clear how the House of Representatives would respond to the hacking and calls for investigations. House committees have not announced plans for hearings, and Republican House Speaker Paul Ryan issued a statement criticizing Russia but blasting what he termed "exploiting the work of our intelligence committee for partisan purposes."

Though congressional Republicans support a probe of Russia's involvement in the election, they have shied away from agreeing with the CIA's assessment that the hacks were deliberately carried out to undermine Clinton.

"It's obvious that the Russians hacked into our campaigns," McCain said Monday in an interview with Reuters. "But there is no information that they were intending to affect the outcome of the election, and that's why we need a congressional investigation."

Separately on Monday, one Republican and nine Democratic electors led by the daughter of the House Democratic leader, Nancy Pelosi, wrote to James Clapper, the U.S. Director of National Intelligence, requesting a briefing on the hacking reports before the Electoral College formally decides the election on Dec. 19.

Clapper's office did not respond to a request for comment about the letter.

Charles Schumer, who will be the Senate Democratic leader next year, said he welcomed McConnell's support for "a deep and thorough bipartisan investigation" with access to all relevant intelligence.

Trump and his staff have repeatedly dismissed the reports as "ridiculous," blaming them on Democrats unhappy that Trump won.

"Can you imagine if the election results were the opposite and WE tried to play the Russia/CIA card," Trump said on Twitter on Monday. "It would be called conspiracy theory!"

A second tweet said, "Unless you catch 'hackers' in the act, it is very hard to determine who was doing the hacking. Why wasn't this brought up before election?"

White House press secretary Josh Earnest on Monday pointed to a public statement from the intelligence community in early October that concluded the hacking had been authorized by "Russia's senior-most officials" and was aimed at sowing discord in the U.S. election.

That statement stopped short of alleging that Russia wanted to help Trump. But Earnest suggested on Monday that may have been the intent.