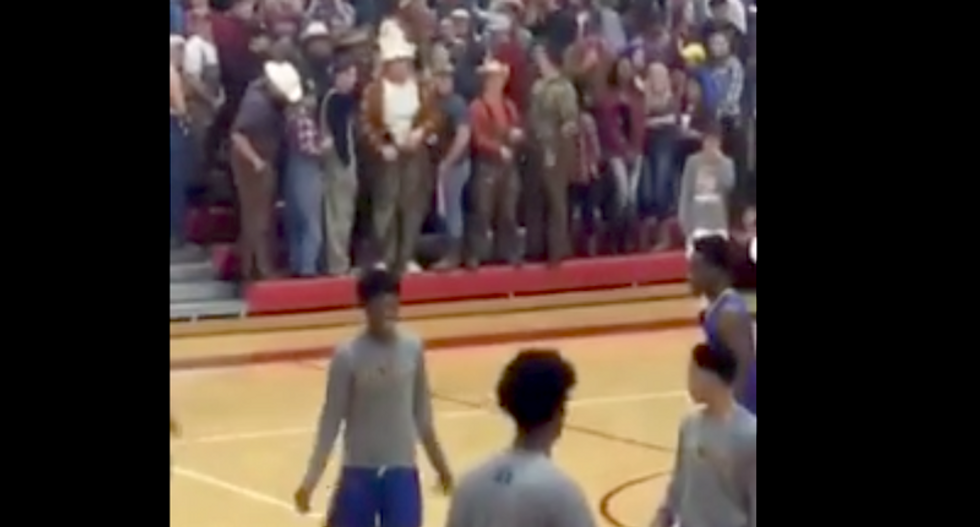 The superintendent of a Missouri school district issued an apology after a racist incident at a high school basketball game was caught on video and went viral, KSHB reports.

Center High School students were playing at Warrensburg High School on Monday night, and just as their roster was being announced, a student in the stands held up a TRUMP sign. Others in the stands wearing cowboy hats turned the backs on the visiting team as they were announced.

The student who recorded the video, a graduate of Center High named Antonia Nunn, said, "I was like wow. You guys are playing an all-black basketball team and you’re all white and it’s just, you turned around, hold up a Trump sign and I thought it was very racist."

Some of the students who presently attend Center High School called the act immature, but didn't necessarily believe it was racially motivated. "It just seems like an immature thing to do. It seems like they are trying to piss us off," one student said.

The student added, "I don't think they are really trying to say anything other than that. Just seems like, I don't know, a way to aggravate us."

Warrensburg R6 School District Superintendent Dr. Scott Patrick said, "Where it went over the line is when they held up the [Trump] sign," he said. "There’s no reason for that to occur at a basketball game so they just took it too far and it was insensitive and not appropriate."

Dr. Patrick also issued an official statement on Tuesday, writing that he called Center School District to offer an apology. His statement reads as follows:

... During the boys' varsity basketball game between Warrensburg High School and Center High School, some members of our student body acted inappropriately and were insensitive toward our opponents. The Warrensburg R-VI School District does not condone these actions and apologizes to anyone who was offended by the actions of these students. We will do everything in our power to rectify this situation and keep events like this from happening in the future.

In the immediate week following the 2016 election results, the Southern Poverty Law Center recorded at least 701 violent or hateful incidents perpetrated by people feeling emboldened by Donald Trump's victory. At least 151 of them were acts of anti-Black racism.