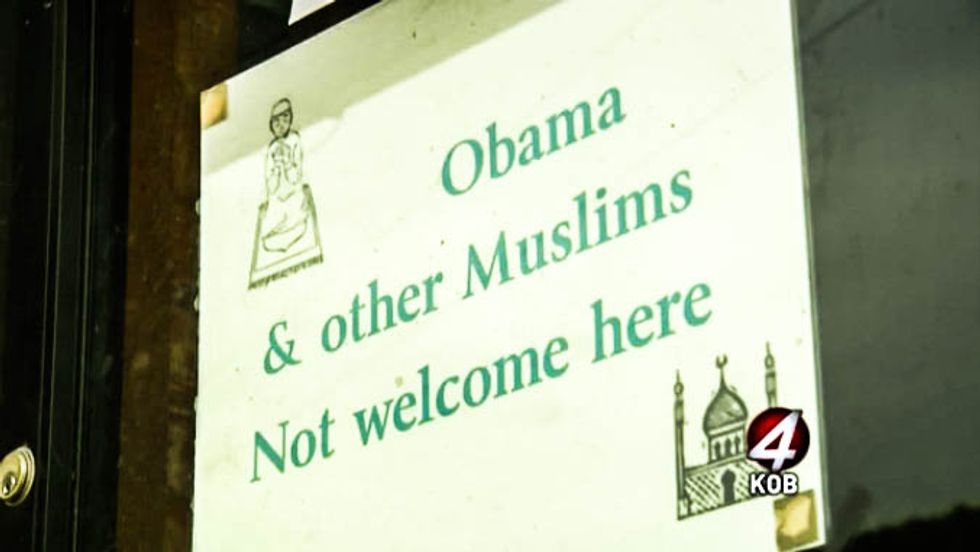 A convenience store in New Mexico has posted a sign telling Obama and 'other Muslims' that they are not welcome (Screen cap via KOB 4).

A convenience store in New Mexico is causing outrage in its community after its owner has plastered its walls with racist signs that attack President Obama, Muslims, and 49ers quarterback Colin Kaepernick.

Local news station KOB 4 reports that a convenience store in Mayhill, New Mexico, has angered local residents after displaying signs that read "Obama and other Muslims not welcome here" and "Colin Kaeper-dick, you overpaid half-breed: Take your millions and go back to Africa."

Despite the store owner's apparent contempt for political correctness, a former coworker tells KOB 4 that the owner is actually very intolerant of anyone who says anything that offends him.

"If you go in there and you offend him, you can't go in there no more," Marlon McWilliams, who used to work at the store, tells the station. "He turns lots of people away."

McWilliams says he tries to avoid going into the store, but says for many people who live in the rural area have difficulty avoiding it because it's "the only place you can go to get milk and bread."

The convenience store's Facebook page has been bombed with negative reviews from locals who simply do not want to be exposed to racism when they go to buy a snack.

"Sick, demented and racist," wrote another. "Saw the signs and refuse to even step any closer. Don't use religion to spew hate!"

Watch KOB 4's video report on the store below.