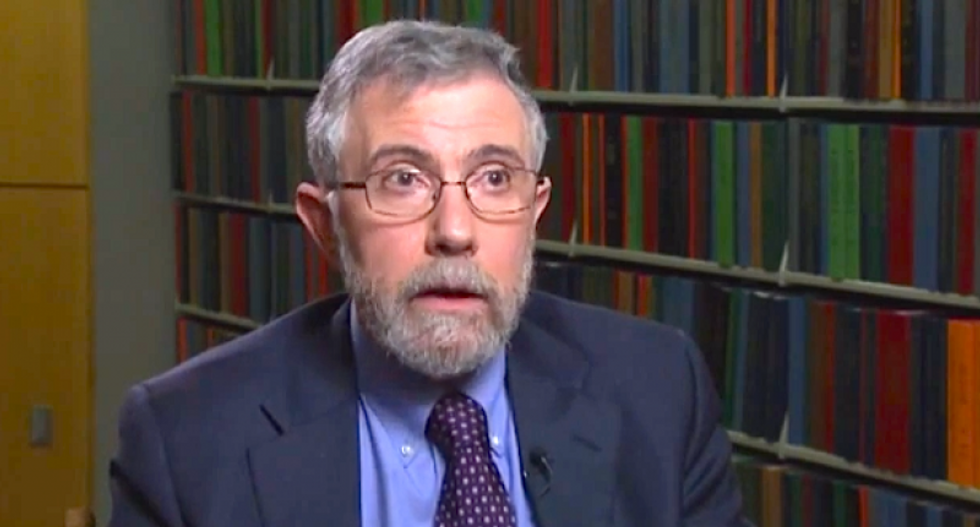 Paul Krugman is still very angry at James Comey and Vladimir Putin for tipping the scales in favor of Donald Trump. If not for them, he writes on Friday, the Clinton administration would be celebrating the good news that "health reform, President Obama’s signature achievement, is stabilizing after a bumpy year."

Krugman has always been an ardent Obamacare defender, though he readily admits it has hit some snags. Premiums did rise sharply this year, due mostly to the fact that more unhealthy people signed up than expected. But the gains are undeniable: "tens of millions of newly insured Americans and dramatic reductions in the number of people skipping treatment or facing financial hardship because of cost," he points out.

The much vaunted Obamacare death spiral that so many Republicans have long wished for looks like a no-show. "Despite higher premiums, enrollments in the exchanges are running ahead of their levels a year ago," Krugman says. "Meanwhile, analysts are reporting substantial financial improvement for insurers: The premium hikes are doing the job, ending their losses."

Those gains would be here to stay if Trump was not intent on betraying his supporters by yanking away this vital life-saving program. Krugman:

In a way, Democrats should hope that Republicans follow through on their promises to repeal health reform. After all, they don’t have a replacement, and never will. They’ve spent seven years promising something very different from yet better than Obamacare, but keep failing to deliver, because they can’t; the logic of broad coverage, especially for those with pre-existing conditions, requires either an Obamacare-like system or single-payer, which Republicans like even less. That won’t change.

As a result, repeal would have devastating effects, with people who voted Trump among the biggest losers. Independent estimates suggest that Republican plans would cause 30 million Americans to lose coverage, with about half the losers coming from the Trump-supporting white working class. At least some of those Trump supporters would probably conclude that they were the victims of a political scam — which they were.

Republican congressional leaders like Paul Ryan nonetheless seem eager to push ahead with repeal. In fact, they seem to be in a great rush, probably because they’re afraid that if they don’t unravel health reform in the very first weeks of the Trump era, rank-and-file members of Congress will start hearing from constituents who really, really don’t want to lose their insurance.

But why the Republican hostility for health reform? Two reasons: One is that the measure was paid for by taxes on the wealthy and it's time to give them a tax break and hurt middle and low-income people instead, goes the reasoning. Secondly, as Krugman points out, the modern GOP is philosophically opposed to the notion that the government has a positive part to play in people's lives at all.

What everyone needs to be prepared for now is how the false narrative about Obamacare will be pushed, namely that it was always a failure, and that the GOP merely conducted a mercy killing. "When the number of uninsured Americans skyrockets on their watch, they’ll claim that it’s not their fault," Krugman concludes ruefully. "Like everything, it’s the fault of liberal elites."

We cannot let them rewrite history in addition to all their other crimes.