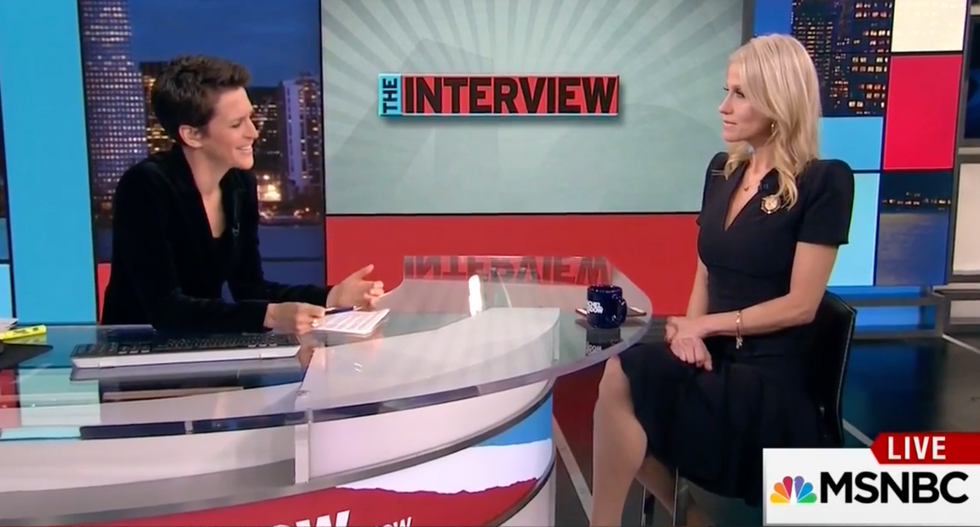 MSNBC’s Rachel Maddow on Thursday needled former Donald Trump campaign manager Kellyanne Conway over the president-elect’s notoriously volatile relationship with the press, reminding the senior advisor that Trump himself not only frequently singles out reporters and news networks to criticize, but his inner circle also relentlessly attacks the press in myriad ways.

After Maddow pointed out that Trump encouraged his rally crowd to target Martha Raddatz over false claims the reporter cried the night he was elected, Conway tried to insist everyone on Trump’s team has “enormous respect” for Raddatz, whom they all agree is a “tour de force.”

Maddow reminded Conway that “telling a story about her that is not true” to crowds of thousands throughout the United States is hardly indicative of “enormous respect” and asked if Raddatz could expect an apology sometime soon. Conway insisted those types of conversations don’t happen in public.

“The accusation was made publicly,” Maddow pressed.

Conway quickly changed the topic, instead discussing Trump’s “relationship with the press” and the “negative press coverage” she says marred his campaign.

Conway said it was frustrating to be in “Trump World” and unable to control the narrative, which is partly why Trump enjoyed his campaign rallies, even continuing them several weeks after he was elected president.

“They’re his way of being the master communicator,” Conway said.

Maddow turned to Melania Trump’s pending lawsuit against the Daily Mail, noting Charles Harder, the same lawyer who Trump transition team member Peter Thiel hired to take down Gawker, is representing the soon-to-be first lady in her libel suit. Thiel’s vindictive bankrolling of Hulk Hogan’s lawsuit against Gawker, as well as Harder’s approach to the suit, were novel means of targeting a specific publication with the explicit intention of putting it out of business.

“Is that going to continue under a Trump administration?” Maddow asked.

Conway, who told Maddow she has a very good relationship with the press, said “the goal here is to tell the truth,” insisting Melania Trump was “slandered and maligned” and deserves the chance to clear her name.

Maddow asked if the goal of Melania Trump’s lawsuit is to make critical publications disappear in the same manner as Gawker.

“[Gawker] made themselves disappear by lying, and not settling, and being arrogant,” Conway responded.

For the record, Gawker did not lie. The suit against the company was over an invasion-of-privacy claim made by Hogan over a sex tape the gossip blog famously published in 2012; Thiel funded the suit, at least in part, over a decade-old beef with the news organization, which outed the him as gay in 2007.

Maddow pointed out that all presidents think the press is lying about them, or misrepresenting their positions, or maligning them in some way, noting it comes with the territory of being president.

“I’ve never seen a First Family … trying to put newspapers out of business through a novel legal strategy,” Maddow said.

Conway immediately pivoted: “Do you know what we were discussing eight years ago around this time? We weren't discussing any negative stuff that was associated with President-elect Obama.”

“It’s just different for the Trumps,” she insisted.

Watch the whole interview below, via MSNBC: