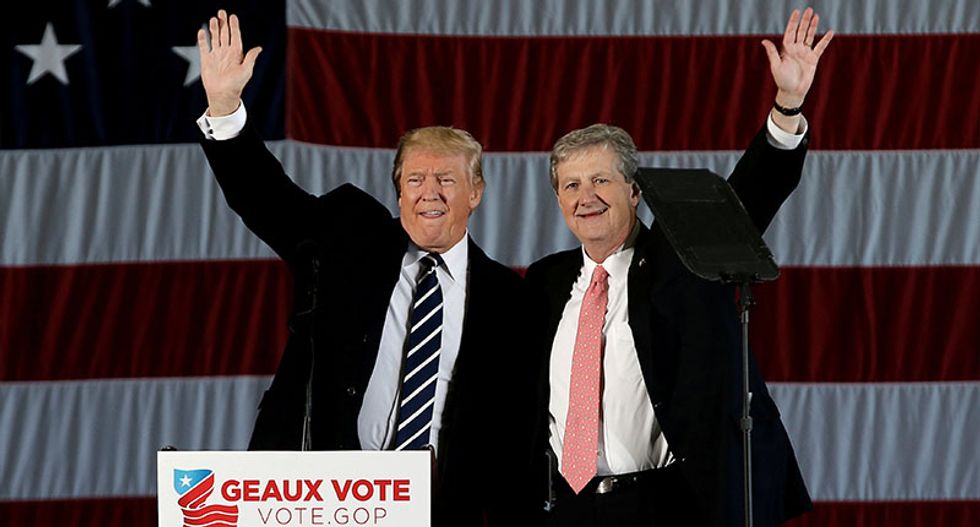 Republican John Neely Kennedy, a candidate for the U.S. Senate, won a runoff election in Louisiana on Saturday against Democrat Foster Campbell in a race that gives the Republicans a 52-seat majority in the chamber.

Campbell told his supporters in the state capital of Baton Rouge that he had called Kennedy to congratulate him on his victory.

Kennedy, the state treasurer and the favorite going into the runoff, had slightly less than 61 percent of the vote with all 3,904 precincts reporting, according to the state Secretary of State's office. Turnout was relatively low.

Kennedy will fill the seat held by outgoing Republican Senator David Vitter, who is retiring.

"I look forward to working with him to secure additional funding for flood relief, to make long term investments in our infrastructure and to bring Louisiana’s federal tax dollars home to help our people," Edwards said in a statement.

Kennedy had campaigned on the popularity in his state of President-elect Donald Trump, who easily won Louisiana.

Trump flew to Baton Rouge for an election-eve rally on Kennedy's behalf, and Vice President-elect Mike Pence earlier stumped for Kennedy as well.

Kennedy, 65, was a Democrat until he switched party affiliation in the conservative-leaning state in 2007.

He had consistently polled well ahead of Campbell since placing first in the state's 24-candidate free-for-all primary, which included former Ku Klux Klan leader David Duke.

Under Louisiana law, all candidates are pitted against each other in the November general election. If no candidate claims a majority, the top two candidates move to a runoff.

Also on Saturday, Republicans Mike Johnson, a state representative, and Clay Higgins prevailed in Congressional runoffs, replacing representatives who made unsuccessful bids for the Senate seat won by Kennedy.