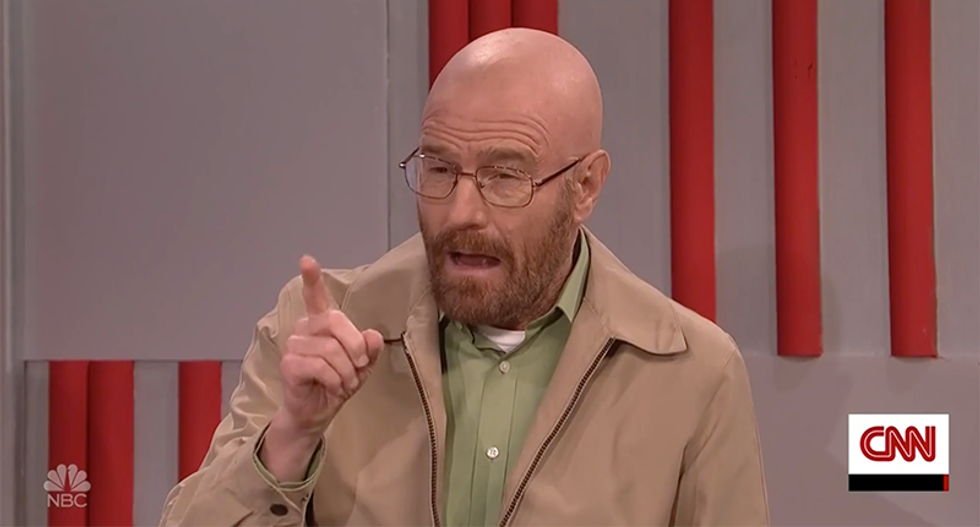 Bryan Cranston made a special appearance on SNL last night. Donald Trump has appointed a climate denier who is suing the EPA to actually head up the Environmental Protection Agency. He's chosen a school privatizing advocate to take over the Department of Education. He's picked an oil drilling advocate to lead the Department of the Interior. It was too much for the folks Saturday Night Live to handle. Naturally, it prompted them to come up with another hilarious Trump cabinet pick: Walter White for the Drug Enforcement Agency.

"I know the DEA better than anyone, inside and out," Bryan Cranston said as "Breaking Bad" character Walter White.

The faux CNN anchor wondered how White was even considered for such a position - but like many things - it all goes back to Steve Bannon.

"Oh, yeah! Steve's the best! We've had some times," White said of the president-elect's chief counsel.

When asked where Bannon found Mr. White, he explained it was from the comments section of Breitbart News. "You know, I'm really surprised he tracked me down because I've kinda been off the grid for a while."

"I like his style," White said of the new president-elect. "I also like that wall he wants to build. Nothing comes in from Mexico, meaning, a lot less competition for the rest of us."

Kellyanne Conway explained that Mr. White "is actually a genius with chemicals, and we're so lucky to get him. The top companies in the country had been knocking on his door for years, but he never answered."

Mr. White explained that he's the one who knocks.

He did admit that he sees some problems with his confirmation.

"Well, they might get hung up on the fact that I faked my own death. I'm only the third person in the trump cabinet to do that," he said.

Check out the hilarious SNL opener below: