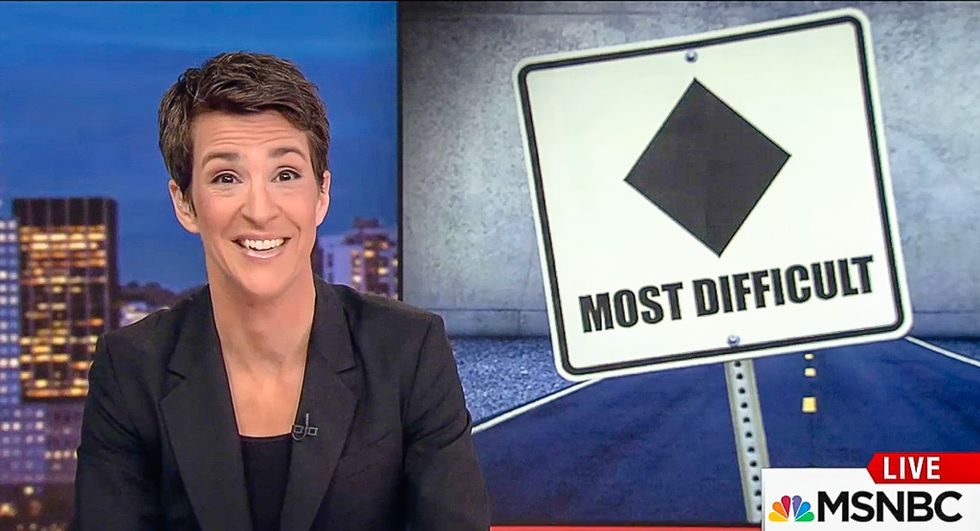 MSNBC host Rachel Maddow lamented on Monday that President-elect Donald Trump's transition picks were like the unsavory characters in the bar scene from the 1977 movie Star Wars.

Maddow noted on her Monday show that Trump's staffing choices were particularly troubling in light of the news that Russia's ambassador to Turkey was shot dead in Ankara and that 12 people had been killed during a terrorist attack in Berlin.

"I'm sorry to say it but it's just been a hell of a day," Maddow said, adding that The Guardian reported on Monday that the White House was trying to "prevent a crippling exodus of foreign policy staffers eager to leave before the arrival of the Trump administration."

To make matters worse, Trump has picked Gen. Michael Flynn to be his national security adviser, even though Flynn was dismissed by the Obama administration after the Army said that he shared classified information with foreign military officers. And Trump's pick of Fox News contributor Monica Crowley to be his senior director of strategic communications for the National Security Council has pushed conspiracy theories about whether President Barack Obama was a U.S. citizen.

Flynn "was on the payroll of the government of Turkey while serving as a top adviser to the Trump campaign without ever disclosing that fact," Maddow observed. "And the Gong Show/Star Wars bar scene quality of the Trump transition, particularly on national security issues, honestly to me most days it is usually something approaching funny."

"But it is national security and it is hard and dangerous and fraught with peril even in good times," the MSNBC host continued. "But right now, what they are inheriting, these are not good times."

"On national security, I am literally praying that the transition gets better than what it is right now."