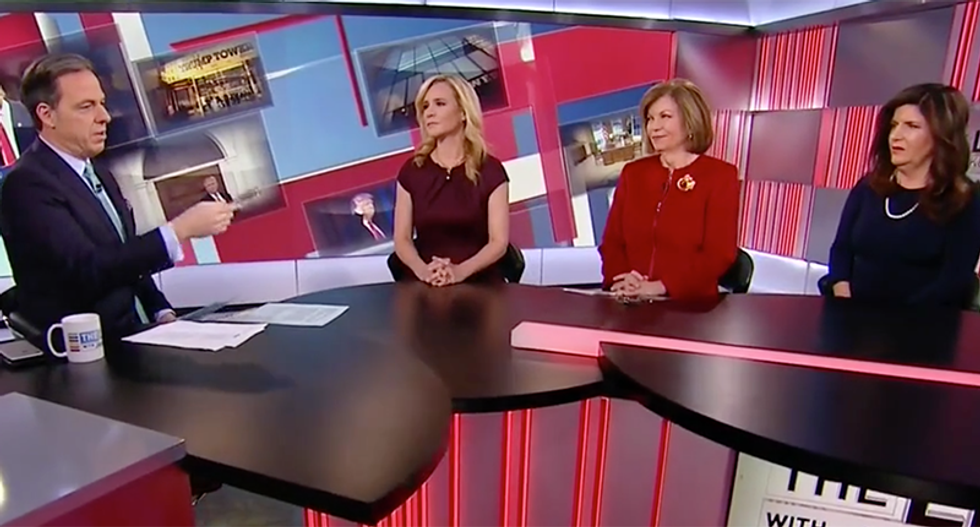 Donald Trump spent a lot of time calling out Hillary Clinton for giving speeches to Goldman Sachs, and Ted Cruz for his wife's previous employment at Goldman. While his campaign wasn't given contributions by the Wall Street bank, his White House will be a comfortable home for the banksters. Friday afternoon's CNN panel on Jake Tapper called it outright hypocrisy.

"He was so anti-Goldman Sachs in his last commercial he had an image of the CEO of Goldman Sachs as an international boogie man," Tapper noted.

RealClearPolitics editor A.B. Stoddard noted that in politics "all roads lead back to Goldman Sachs." She explained, however, that any voters that moved from Bernie Sanders to Trump after the primary will likely be upset about the development.

"Trump will get an excuse here and there and flip flop here and there," she continued. "If it looks real swampy in a year including his own business arrangements, then it could suddenly turn on him and people can say this is the system we always had, a new face pretending to have a new system. This could pile up and become an obvious criticism later on that you always, in the end, are supporting people from Goldman Sachs and giving them good jobs and influence at the highest levels of government."

But when it comes to Trump's voters, they couldn't possibly care less about their idol lying to them.

"There's very little he can flip flop on," said CNN contributor Salena Zito. "You can't get inside their minds. It wasn't always what he said but how he said it and it was because he was not a politician. They trust him at this moment. I mean, there's this sort of, you know, honeymoon period to be able to -- to pick whoever he wants because they trust his decision-making at this point."