The Electoral College was explicitly designed to protect slavery 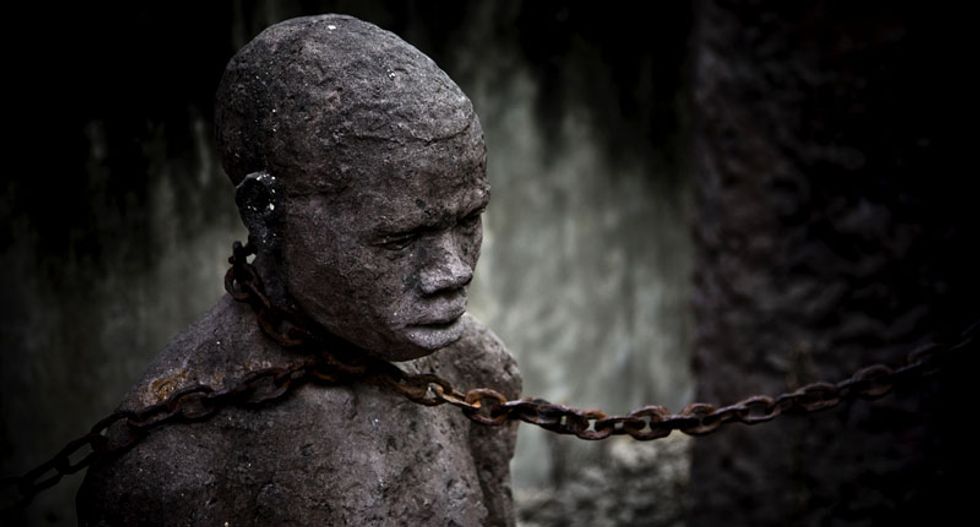 Because of the Electoral College, for the second time in 16 years, the person with the most votes will not become president. It is likely that Hillary Clinton will have a margin of more than 2,000,000 votes. This will make her the most popular presidential candidate to ever lose a presidential election. She follows in the footsteps of Al Gore, Grover Cleveland, Samuel Tilden, Andrew Jackson, and probably John Adams.

We know the Electoral College is deeply undemocratic. Presidential electors are allocated by adding the two senators to the number of representatives each state gets. Thus the smallest states have proportionally more power in electing the president than the large ones. In 2016 Donald Trump won 66 electoral votes from 14 small states, with a total population of about 26,300,000. Hillary Clinton won 55 electoral votes from California, with a population of 37,254,000. The math is clear. Twenty-six million people substantially outvoted thirty-seven million people. Something is clearly wrong.

How did we get such an insane, undemocratic system for choosing our president? The answer, oddly enough is because of slavery. The system was explicitly designed to protect slavery. One hundred and fifty years after the Thirteenth Amendment abolished slavery, this proslavery provision lurks in our political backyard, like some horrible monster, waiting to spring on us to undermine the very notion of democratic government in the world’s oldest constitutional democracy.

How did we come up with the Electoral College? The classic explanations are that the Framers feared the common voters and that the Electoral College was needed to protect the small states from the large states. But, except for a complaint about voters from Elbridge Gerry of Massachusetts, there is no evidence in the records of the Constitutional Convention to support the first contention. On the second issue, delegates rejected allowing governors to choose the national executive precisely because the delegates feared the governors from the more numerous small states would outvote the larger states. Thus, both explanations are essentially urban legends that hide the real origin of the Electoral College.

While discussing how to choose the national executive, James Wilson of Pennsylvania, proposed that the chief executive be elected by “the people,” citing the successful experience of the popular election of governors in New York and Massachusetts. He argued that only the most famous people would be chosen under such a method. Later, Gouverneur Morris also argued in favor of election by the people: “He ought to be elected by the people at large, by the freeholders of the Country.” Morris argued that “If the people should elect, they will never fail to prefer some man of distinguished character, or services; some man, if he might so speak, of continental reputation.”

South Carolina’s Charles Pinckney opposed direct election of the president because the “most populous States by combining in favor of the same individual will be able to carry their points.” This statement cannot, however, be taken at face value. The issue here was not population, but the voting population. Half the people in South Carolina were slaves, and Pinckney could not support the direct election of the president, because that would hurt the South.

Hugh Williamson of North Carolina made this point directly, bluntly noting that the South could not support popular election because the people would “vote for some man in their own State, and the largest State will be sure to succeed. This will not be Virga. However. Her slaves will have no suffrage.” This was a critical observation. If the president were directly elected by the people, then southerners, especially Virginians, might not get elected. Virginia had the largest population of any state, but about 40% of its people were slaves and none of them could vote. The same of course would be true for the rest of the South.

Somewhat later James Madison, conceded that "the people at large" were "the fittest" to choose the president. But "one difficulty ... of a serious nature" made election by the people impossible. Madison noted that the "right of suffrage was much more diffusive in the Northern than the Southern States; and the latter could have no influence in the election on the score of the Negroes." In order to guarantee that the nonvoting slaves could nevertheless influence the presidential election, Madison favored the creation of the Electoral College.

The Convention then accepted the idea of an Electoral College. By this time the Convention had already agreed to count slaves for representation under the three­fifths compromise, counting five slaves as equal to three free people in order to increase the South's representation in Congress. Thus, in electing the president the political power southerners gained from owning slaves (although obviously not the votes of slaves) would be factored into the electoral votes of each state.

Over one hundred and fifty years ago the United States rid itself of slavery. Perhaps it is now time to rid ourselves of the last constitutional vestige of the peculiar institution: the Electoral College. After all, it is surely the most peculiar aspect of our political system. Moreover, as the election of 2000 shows, it does not seem to be working very well. Now that slavery is no longer an issue, perhaps it is time to reexamine James Madison's original statement, "The people at large" are "the fittest" to choose the president, because "The people generally could only know & vote for some Citizen whose merits had rendered him an object of general attention & esteem."

Indeed, it is time to heed Madison's advice.

Paul Finkelman is John E. Murray Visiting Professor of Law at the University of Pittsburgh College of Law. He is the author of "The Proslavery Origins of the Electoral College" (Cardozo Law Review, 2002).