Trump adviser tries to spin way out of stars shunning inauguration: 'We’re not putting on Woodstock' 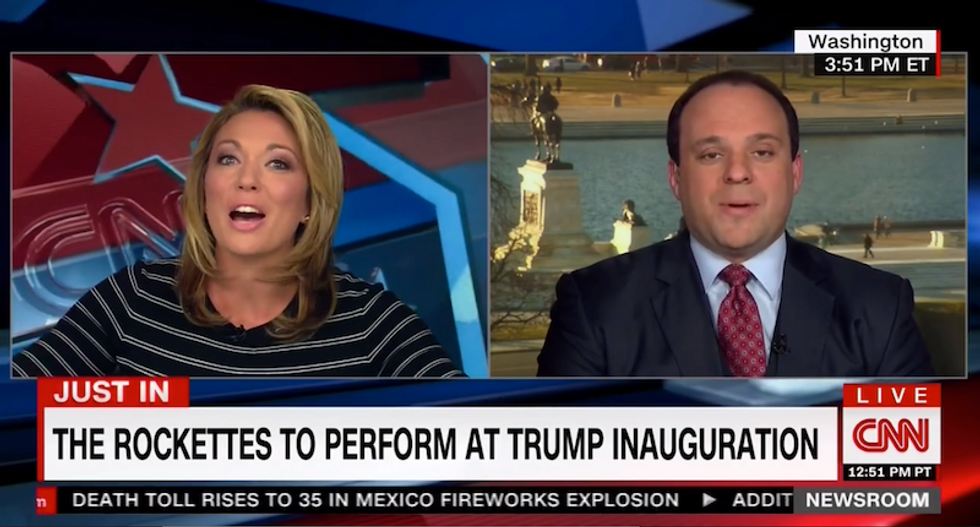 President-elect Donald Trump has been having a rough time finding anyone to perform for his quickly-approaching inauguration ceremony on Jan. 20, 2017. The only talent his team has been able to secure thus far are a 16-year-old America’s Got Talent contestant and the Mormon Tabernacle.

Some stars who were approached to perform only to decline include Elton John, David Foster, John Legend, Garth Brooks, and Celine Dion. CNN's Brooke Baldwin had Presidential Inaugural Committee communications director Boris Epshteyn on her segment on Thursday afternoon to discuss the matter.

"Start naming names," Baldwin said. "Tell me who you have!"

"First of all, happy holidays, Merry Christmas, happy Hannukkah," Epshteyn started.  "As far as the inauguration goes, we are extremely excited. We've had a ton of great performers, entertainers, and Americans reaching out wanting to be part of it. And I can announce right now on your air that the Radio City Rockettes will be taking part in the inaugural events." The Rockettes are an iconic New York City dance troupe.

Baldwin replied, "I remember being a kid and going to Radio City and they're amazing. Let me ask you this, did you approach them? Did they approach you? What exactly will their role be at inauguration?"

"We're still determining exact specifics but they will be part of the inaugural balls, there may be something else," Epshteyn shared with Baldwin before getting into the "Donald J. Trump movement."

He said, "They are going to be a big part of the celebration of freedom and democracy, a uniting event whereby Donald J. Trump and the Trump movement move into Washington, D.C. and get to work, making sure Americans are safe at home and in their jobs."

Epshteyn talked a lot about the few performers that they had solidified and their role in celebrating America, democracy, and freedom.

"Now, Boris, I have to ask you. I can just hear people at home thinking, 'Great, the Rockettes and the Mormon Tabernacle Choir.' Like, where are your big names? Where are the bigger stars? Do you have any reveals that you're keeping kind of close to the vest?"

Epshteyn then continued on a tangent about what the Trump administration has promised to get to work on, noting his Carrier deal, as well as discussions around Boeing, Lockheed Martin, and Air Force One.

When Rep. Marjorie Taylor Greene (R-GA) picks a fight with a neighbor who has a transgender daughter, it doesn't necessarily have to do with Greene being a horrible person, although that isn't out of the question, according to conservative Washington Post columnist Max Boot, it's all about the Benjamins.

In a recent expose about the GOP fundraising website WinRed, it was revealed that Republican donations accounted for 3 percent of all fraud cases in the entire United States over the course of a month. It was a "checked box" scam that used language to dissuade people from unchecking a box that secretly put them on the hook for monthly and then weekly donations.

Six young climate activists are suing the Brazilian government for revising its commitments under the Paris Agreement in a way that allows the country to emit more greenhouse gases, environmentalists said Wednesday.

The lawsuit seeks to annul the revised emissions commitments Brazil submitted in December, which effectively increased the country's 2030 carbon target by more than 400 million tonnes.