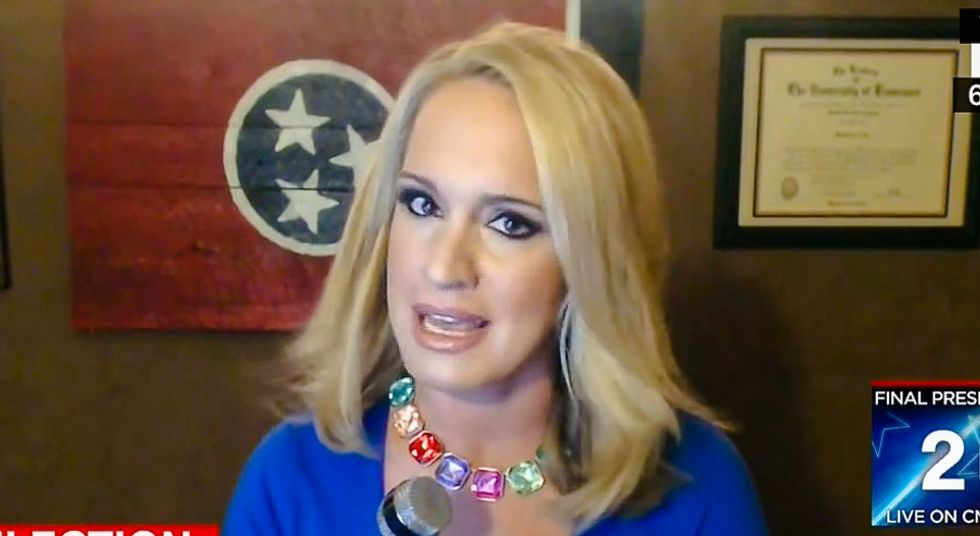 In an appearance on NPR's The Diane Rehm Show on Wednesday, Trump spokesperson Scottie Nell Hughes asserted that in today's information landscape, "There are no such things as facts."

She was appearing alongside Atlantic editor James Fallows, Politico's Glenn Thrush and Margaret Sullivan of the Washington Post in a discussion of the role of journalists in a prospective Donald Trump presidency.

Host Diane Rehm asked Hughes how she feels about pundits and media watchers calling out Trump's fabrications and lies.

"Well, I think it's also an idea of an opinion. And that's -- on one hand I hear half the media saying that these are lies, but on the other half there are many people that go, no, it's true," Hughes said. "And so one thing that has been interesting this entire campaign season to watch is that people that say facts are facts, they're not really facts."

She went on, "There's no such thing, unfortunately, anymore of facts. And so Mr. Trump's tweet amongst a certain crowd, a large -- a large part of the population, are truth. When he says that millions of people illegally voted, he has some -- in his -- amongst him and his supporters, and people believe they have facts to back that up. Those that do not like Mr. Trump, they say that those are lies, and there's no facts to back it up."

Thrush responded, "First I've got to pick my jaw up off the floor here. There are no objective facts? I mean, that is -- that is an absolutely outrageous assertion. Of course there are facts. There is no widespread proof that three million people voted illegally. It's been checked over and over again. We had a Pew study that took place over 15 years that showed people had more likelihood of being struck by lightning than voting illegally in an election."

"Facts are facts. I'm sorry you don't like the facts, but, you know, you said a couple of things here that I think are -- people really have to understand. First of all, your president, our president, Donald Trump, president-elect, is not the first president to go around the mainstream media and get to people. What were the fireside chats? What were -- what was the early advertising, the earliest ages of our -- days of our republic, media was entirely partisan," he said.

"So you've got to understand the historical precedent," he concluded. "Trump is just using the newest tools at his disposal, and you are -- the one thing I think you got totally right, that PolitiFact would give you a completely true score on, is we definitely need to start responding to this."