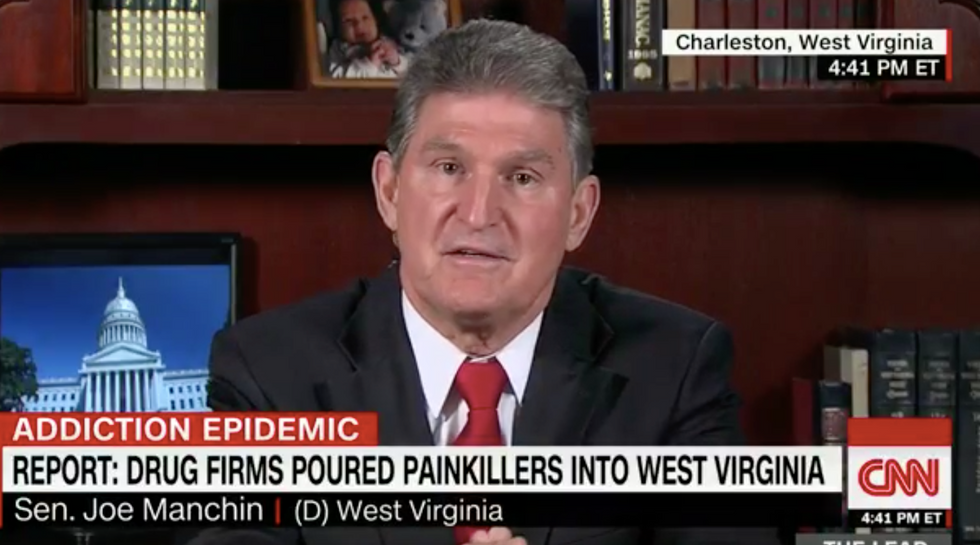 West Virginia Democratic Sen. Joe Manchin told CNN on Tuesday night that to stop the epidemic of opiate abuse currently gripping his state, the U.S. must "declare a war on drugs."

In fact, the 45-year-long "War on Drugs" that was begun by Pres. Richard Nixon (R) in 1971 has been a wildly expensive -- and yet wildly ineffective -- boondoggle that has resulted in mass incarcerations and decimated the nation's black communities through what author Michelle Alexander calls "the new Jim Crow" laws.

Manchin was speaking with CNN's Jake Tapper when he made the tone-deaf statement. Tapper asked what President-elect Trump plans to do to halt the explosion of prescription painkiller abuse in this country.

"Well, we need to declare a war on drugs," Manchin said. He touted his experience visiting recovering addicts in rehabilitation facilities and said that addicts "started out as a kid, you know, smoking occasional recreational marijuana and then that led in to prescriptions taken out of their parents' or grandparents' medicine cabinet and become a 'cool kid' and before you know it, it turned into where they just were hooked."

"Heroin comes on," he continued. "Now, we have the fentanyl coming on and it's just been unbelievable."

The so-called "War on Drugs" began in 1971 when Pres. Nixon increased the size of drug enforcement agencies, imposed mandatory sentencing laws -- which are now acknowledged to be racist and unevenly applied across the justice system -- and introduced controversial search and seizure practices like "no-knock" warrants.

The effort has largely been a spectacular failure. The nation has squandered trillions of dollars to no effect. Drug use has not fallen -- it's actually increasing -- and drug pipelines into the country have not slowed down.

However, the United States now boasts the highest percentage of incarcerated citizens in the world. A disproportionate number of those people are nonwhites -- who Alexander and other scholars have concluded are unfairly impacted by mandatory sentencing laws and so-called "broken windows" policing.

A former Nixon aide admitted earlier this year that the "War on Drugs" was actually an operation designed to disenfranchise and incarcerate the two groups Nixon believed to be most hostile to his presidency: black Americans and the youth movement.

Furthermore, Manchin's blame of marijuana use as a "gateway drug" is an oft-cited, but scientifically invalid myth used by anti-pot crusaders.

In fact, pharmaceutical companies ignored warnings and issues with the painkiller OxyContin and spent billions of dollars marketing it in West Virginia and other economically impoverished areas. The drug quickly created a new generation of addicts due to its rapid delivery of a strong dose of opiate painkillers that abruptly ends before the allotted 12 hours that the drug is supposed to last.

Manchin is the father of much-reviled pharmaceutical CEO Heather Bresch who came to national attention this year when her company dramatically jacked up the price of the Epi-Pen, a life-saving rescue medication for allergic reactions.

He is one of the few Democrats currently cozying up to President-elect Donald Trump. Manchin is an opponent of renewable and green energy initiatives due to his state's economic reliance on coal.

Last week he made multiple trips to Trump Tower and was considered by political observers to be in line as Trump's possible Secretary of Energy. That honor ultimately went to ex-Texas Gov. Rick Perry (R).

Manchin has urged his fellow Democrats to get on the Trump train and make nice with the incoming administration.

“My job as a senator is to do everything I can to help him,” Manchin said of Trump on Friday. “And If I do disagree -- respectfully disagree -- I’m not calling people names. I’m not basically trashing their ideas. I might think there’s a better path forward. I’ll do that in a productive manner.”

On Monday, he said on Fox News that Democrats angry about Trump's victory need to "get over it and move on."