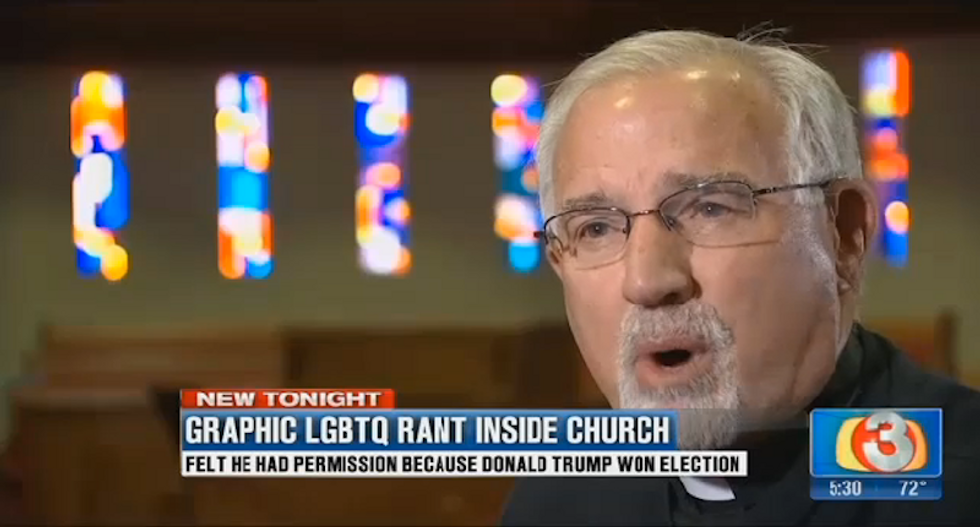 An anti-LGBTQ man stormed into a church in Tempe, Arizona last Wednesday because of the rainbow flag hanging outside, AZ Family reports. The man reportedly entered the office of the Community Christian Church and went on a hate-filled rant about LGBTQ communities, and using Donald Trump's election victory as a reason for spreading his message.

"He said that if Hillary would have won he would have driven right on by the church without stopping," Pastor Doug Bland said. "But because Trump won he felt he had permission to say and act the way he wanted to expressing the hate that he had for this particular group of people."

The man reportedly also made threats to pay protesters to organize outside the church "and spread lies about pedophilia among the congregation." Trump has alleged that professional protesters are getting paid, however, he wasn't talking about his own supporters.

"I think it’s a challenge to us to make sure we respond with love and with grace instead of responding hate for hate," Bland said, after explaining that the employee that the man confronted had kept her calm throughout the incident.

Bland explained, "No matter when we’re living there’s always going to be some kind of cloud hanging over us, conflict we have to face." He added, "Right now the division in our country over what does a real democracy look like and how can we be citizens together and move forward as a nation is sort of the cloud that we’re facing."

The Southern Poverty Law Center began tracking violence and hateful incidents that followed the election. In their report, they found that there were at least 80 anti-LGBTQ incidents in the week following Trump's victory.

The organization recorded a total of at least 701 incidents that took place across the country in the week following the Nov. 8 election. The report noted that most incidents were anti-immigrant (206), followed by anti-Black (151), and anti-LGBTQ.

For more coverage, see below.