WATCH: Black mother calls cops on white man who choked her son – but she gets arrested instead 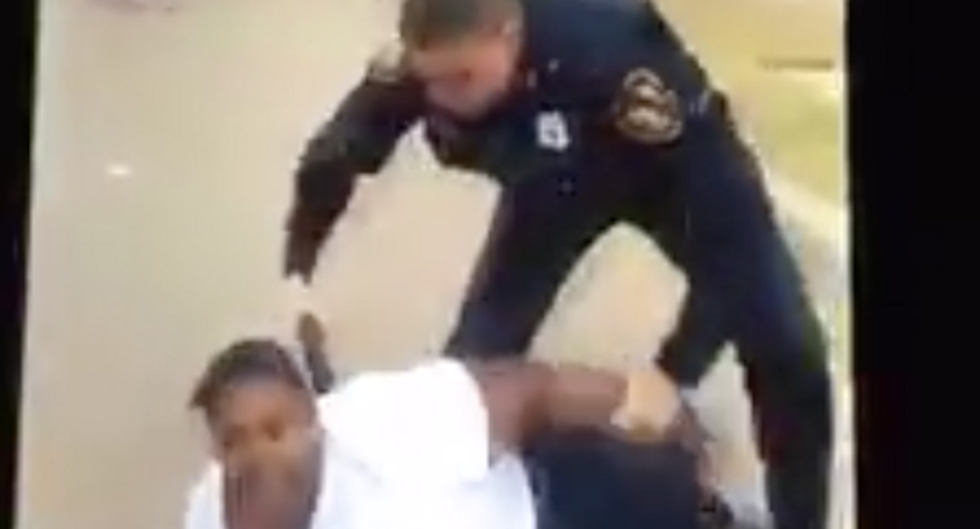 A black woman identified as Jacqueline Craig and her daughter were violently apprehended and jailed by a white Fort Worth, Texas police officer after Craig tried to explain that her white neighbor had choked her 7-year-old son.

The video, which circulated on social media, shows the unidentified officer conferring with a white man, then heading over to Craig. She tells the officer that the man choked her 7-year-old son because he claimed her son threw some papers on the ground. In response, the cop asks her why she didn't teach her son "not to litter." Craig reasonably points out that regardless of his behavior, the man has no right to manhandle her child. "Why not?" the officer retorts.

Craig tells the officer that he shouldn't tell her how to raise her kids.

"If you keep yelling at me, you're going to piss me off," the cop says in response. Her daughter tries to get between the officer and her mom, seemingly to defuse the situation. In response, the officer slams Craig stomach-down on the ground, whips out his taser and handcuffs her. He then goes after her daughter, throwing her on concrete and slapping on cuffs. It's not entirely clear, but at some point it sounds as if his taser goes off.

As the Kirsten West Savali points out in the Root, the video appears to be a chilling illustration of white and police aggression towards black bodies. " ... after the cop patronized and antagonized Craig—dismissing the violence against her son—he showed her that, for him, her son’s life didn’t matter, and neither did her life or the lives of her daughters. Just like the white man who assaulted a black child, this cop felt the need to show domination over black bodies," she notes.

Conflict de-escalation is the centerpiece of the police reform movement: there's evidence it's safer and more effective. In Britain, where most officers don't carry guns, police training prioritizes de-escalation, even when suspects are visibly armed, which doesn't appear to be the case here.

The Fort Worth Police Department’s Internal Affairs Division said they would issue a statement this afternoon, according to the Root.