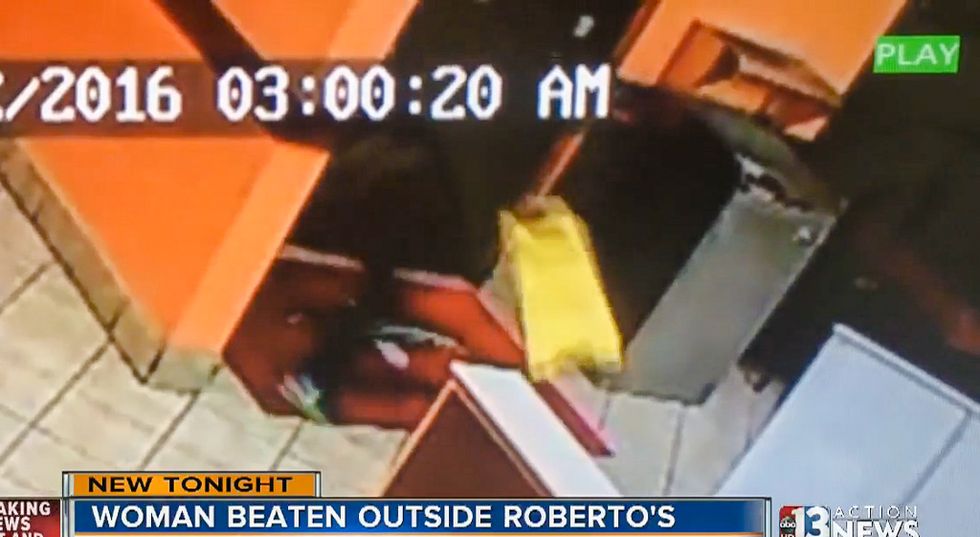 A Las Vegas woman received 15 stitches and expects to be scarred for life after a man yelling racial slurs beat her with a sign.

Carmen Porter told KTNV that she stopped by Roberto’s Taco Shop after her shift early Monday morning. She said that she was pulling out of the drive-thru when she heard a man shouting at her.

Porter explained that she parked her car, and "I asked him, what did you just say to me and [he] began shouting and saying 'It is called freedom of speech. You heard me.'"

Security video shows the man stepping into the restaurant, grabbing a wet floor sign and swinging it through the door at Porter. The man then drops the sign and calmly begins ordering his food.

"At that point, my phone is covered in blood," Porter stated. "And it didn't process in my mind, get back in the car."

After the suspect receives his food, he is seen in the video grabbing the wet floor sign one again. A second camera angle shows him returning to the parking lot and beating Porter until she falls to her knees.

"I remember falling towards the rocks, and even when I was on my knees in the rocks he kept hitting me,” she remembered.

Eventually, a friend of the suspect pulls him off Porter and they drive away.

Porter said that she was shocked after seeing the surveillance video.

"To see him walking back to the counter to finish ordering his food, like it was OK," she stated. "I don't know what to do but be hurt and angry."

Detectives told Porter that the video should help police catch the perpetrator.

She received 15 painful stitches and lamented to KTNV that she would probably have a scar for the rest of her life. But Porter said that the emotional wounds were equally as painful.

"Just the derogatory terms he was throwing at me with each whack. Makes me extremely angry," she said.

Watch the video below from KTNV.