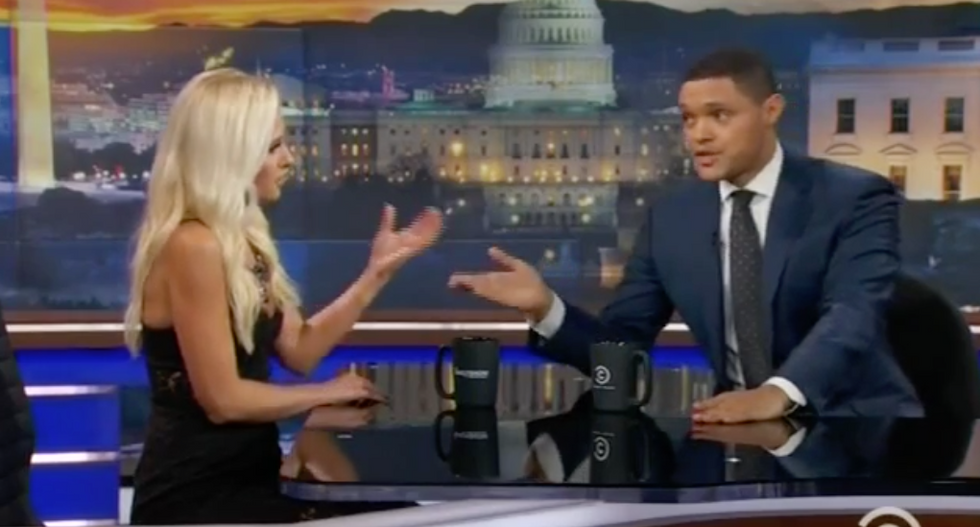 Wednesday night Comedy Central host Trevor Noah hammered conservative commentator Tomi Lahren over her incendiary rants about Black Lives Matter and other protest groups, noting, “for somebody who is not racist, you have to spend a lot of time saying ‘I am not racist.’”

Lahren told Noah she takes issue with Black Lives Matter because of the “rioting” and “looting" that occurs at some of the protests, insisting the entire movement ascribes to a violent, anti-cop narrative.

“You’re the same person who argued on your show that just because Donald Trump has supporters from the KKK doesn’t mean he’s in the KKK,” Noah reminded her.

Noah used that same logic to ask Lahren if all police are racist because some officers discriminate against black people. She evaded the question, asking if Noah was aware that black men are “18.5 times more likely to shoot a police officer than a police officer is to shoot a black man?”

“Those are the statistics no one wants to talk about,” Lahren said, going on to argue that she’s not racist or a bad person because she “doesn’t see color.”

“So what do you do at a traffic light?” Noah asked.

Later in the segment, Noah asked Lahren if she’s intentionally trying to be incendiary with her claims, particularly her assertion that Black Lives Matter is the new Ku Klux Klan.

She listed off examples of Black Lives Matter protests turning violent adding, “When that now becomes the narrative and you’re starting to loot, burn and riot: What did the KKK do?”

Turning to Lahren’s criticism of 49ers quarterback Colin Kaepernick, Noah asked the conservative commentator what she thinks the “right” way for black people to voice their opinions is.

“No one brought up whites at all—I never said that,” Noah responded before joking, “I don’t see color.”

Watch the clips below, via Comedy Central:

Complete interview below via Comedy Central: