'You're not fooling anybody': Eichenwald challenges Tucker Carlson with a binder full of his falsehoods 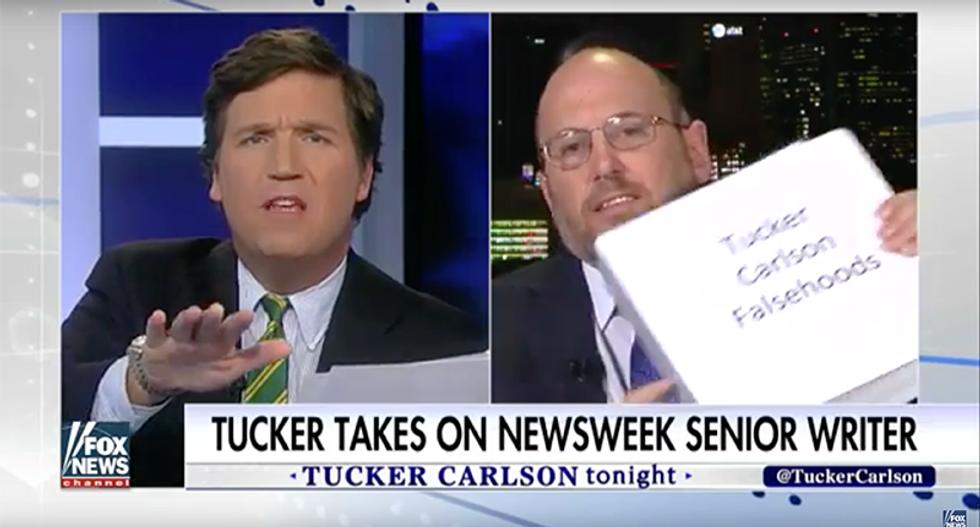 Fox News host Tucker Carlson got more than he bargained for when he had Newsweek reporter Kurt Eichenwald on his show Thursday night. Eichenwald was prepared with a huge binder that said "Tucker Carlson Falsehoods" on the front of it. The binder held all of the examples of false information that Carlson has spoonfed Fox News viewers.

Carlson decided to hit Eichenwald for the tweets that the reporter was pushing out against Carlson. He also claimed Newsweek has suddenly developed a left-leaning slant to their news coverage. According to Mediaite, Carlson took issue with the Eichenwald tweet, “I believe Trump was institutionalized in a mental hospital for a nervous breakdown in 1990, which is why he won’t release medical records.”

Eichenwald at one point shot back to Carlson, claiming, “You’re not fooling anybody, you’re trying to stop me from giving the answer.”

Carlson attacked Eichenwald claiming the conversation was "a little nutty."

The two continued to argue and finally, Eichenwald said that he was happy to bring out his binder again to go through all of the information.

Carlson shamed Eichenwald at the end of the interview, “I’m concerned about your behavior on this show tonight.”

See the full video below via Fox News: