Ana Navarro opens can of whoop ass on Jan Brewer: 'Muslims think it's a Muslim ban' 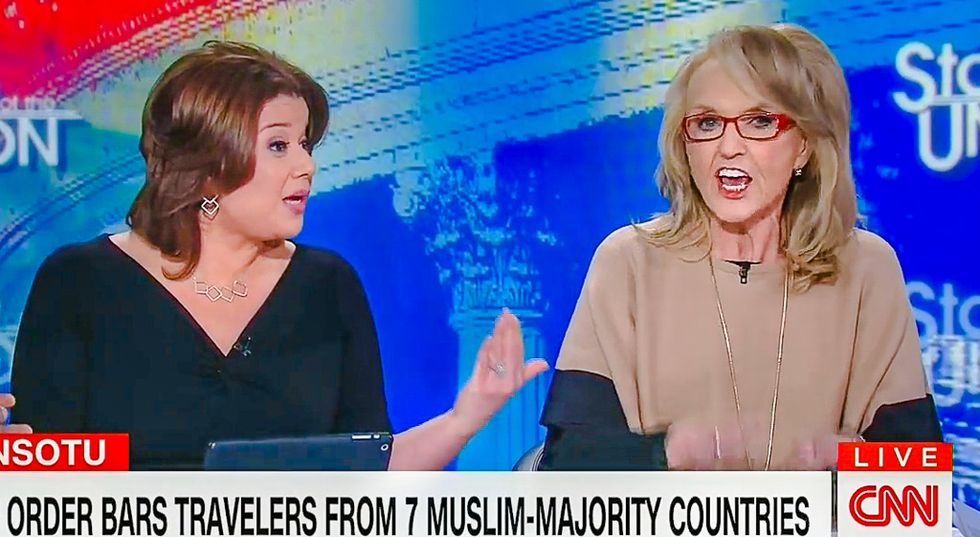 "This is one where as exhausted as they may be, Republicans need to appeal to their sense of conscience, to their principles, to what is right and wrong, to American values and they need to speak up," Navarro told a CNN panel. "Folks may want to tell us this is not a Muslim ban. I'll tell you who thinks it's a Muslim ban. Muslims think it's a Muslim ban, those who want a Muslim ban -- like [son of Gen. Michael Flynn] little boy Flynn and David Duke, the former KKK leader, are celebrating it as a Muslim ban."

"That was a lot to take in," Brewer quipped in reply. "People in America want to be secure and safe. And with the ban, I think it's perfectly fine to put it on a pause and do the complete vetting."

According to the former Arizona governor, it is not fair to call Trump's executive order a "Muslim ban" because he has not barred Muslims from every country.

"I believe that the administration probably has high intelligence reports that these countries that he has named, there's a danger there," Brewer opined. "And he promised the people of America, of the United States, that he was going to keep us safe."

Navarro noted that the Trump administration had refused to consult with Department of Homeland Security experts before enacting the travel ban.

"This should be very worrisome to everyone, including my party, that the Department of Homeland Security was not consulted," Navarro said. "That department expressed concern about it being implemented on legal permanent residents and got overridden by people in the White House who are not national security experts."

"This should not be done with folks with no experience and nothing but campaign promises," she added.

"American people of the United States, they want our country to be safe!" Brewer insisted. "President Trump has surrounded himself with very, very intelligent cabinet members and intelligent White House administrators."

"You don't know that," Brewer shot back.