Ben Carson chokes over Warren's grilling: 'Not my intention to do anything to benefit any American' 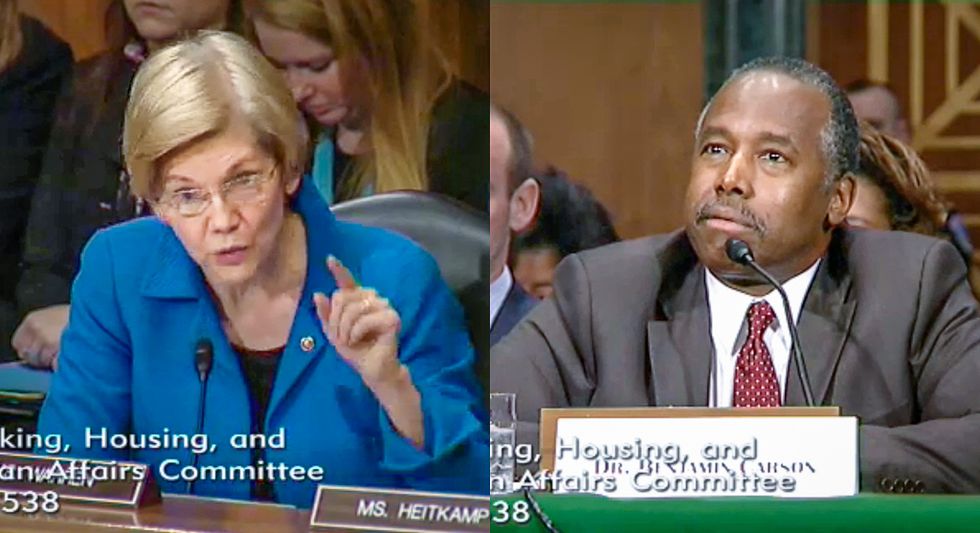 Under questioning from Sen. Elizabeth Warren (D-MA) on Wednesday, Ben Carson mistakenly asserted that he would not "do anything to benefit any American."

At Carson's confirmation hearing for secretary of Housing and Urban Development, Warren noted that President-elect Donald Trump will be uniquely positioned to benefit from HUD contracts due to his real estate business. During a press conference a day earlier, Trump had revealed a controversial plan to allow his sons to run his business instead of putting his assets in a blind trust as other presidents have done.

"My concern is that among the billions of dollars that you will be responsible for handing out in grants in loans," Warren said to Carson. "Can you just assure us that not one dollar will go to benefit either the president-elect or his family?"

"It will not be my intention to do anything to benefit any American," Carson declared boldly. "It's for all Americans."

Although Carson most certainly did not mean to imply that he would not try to help Americans, the remark struck a chord with some viewers.

Ben Carson tongue tied when asked about Trump benefiting from HUD $ 'It will not be my intention to do anything to benefit any American'
— Andrew Rafferty (@Andrew Rafferty)1484237481.0

In the end, Carson declined to promise that federal dollars would not be funneled into the pockets of the Trump family.

"You can take it to mean that I will manage things in a way that benefits the American people," Carson insisted. "If there happens to be an extraordinarily good program that's working for millions of people and it turns out that someone that you're targeting is going to gain $10 from it, am I going to say, 'No, the rest of you Americans can't have it'? I think logic and common sense probably would be the best way."

Warren replied: "The problem is that you can't assure us that HUD money -- not of $10 varieties, but of multi-million dollar varieties -- will not end up in the president-elect's pockets."

"And the reason you can't assure us of that is because the president elect is hiding his family's business interests from you, from me, from the rest of America," the senator said. "And this just highlights the absurdity and the danger of the president-elect's refusal to put his assets in a true blind trust."

"He knows what will benefit him and his family financially but the public doesn't."