Cooper wrecks Kellyanne Conway for denying intel report: 'You weren't in the briefing. You don't know' 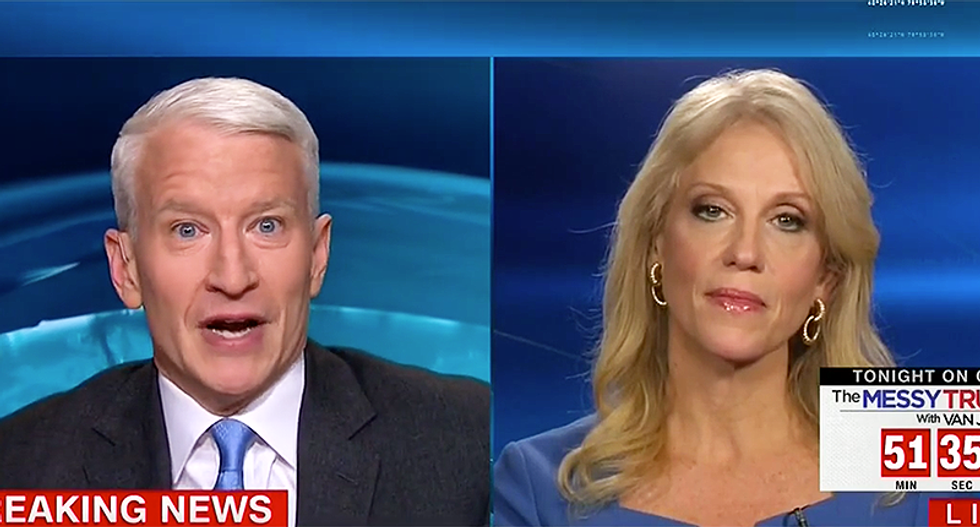 CNN's Anderson Cooper held Kellyanne Conway's feet to the fire for accusations she and her boss has made about the network peddling fake news.

Cooper said that at today's press conference Sean Spicer said that both CNN and BuzzFeed ran with unsubstantiated claims. "That's simply not true," Cooper said. He clarified that CNN said it wouldn't post the claims the way that BuzzFeed did, because there was no one to substantiate the claims.

He further asked Conway if she would state "here and now" that the accusations Spicer made were untrue, but she refused to do so.

"Our press secretary Sean Spicer was absolutely correct and so was our president-elect," Conway said.

Cooper said that CNN didn't report what BuzzFeed did and Conway claimed that she didn't say that CNN did do that, but that they linked to it in their story.

Conway took a condescending tone, "I know that CNN must be feeling the heat today." She explained that the headline said that Trump was given the information and she said that Trump never received a briefing on this information. To be fair, Trump has refused to take briefings on many issues of national security.

"You can't say you're not reporting it if it's on your website!" Conway shouted at Cooper.

"You can't answer this question, what is inaccurate about the report," Cooper demanded.

Conway tried to pivot to blame President Barack Obama for not doing enough to stop cyber hacking over the last eight years as president. Cooper wouldn't let her get away.

"I know you like to pivot," he told her.

Conway said that if anyone on the website links to BuzzFeed that's the same as reporting it.

"Ok, again, you're not answering the question," Cooper said. He maintained that if the information is in the documents from the intelligence report they had a duty to report it.

Conway alleged that if it was wrong CNN wouldn't do anything about it anyway, but Cooper said if their report is wrong they would correct it and announce they were wrong. Conway claimed that CNN has never done that about the claims that polling was off during the election. Cooper said that the two couldn't possibly compare.

He tried once again to get Conway to reveal what was inaccurate, but he wasn't able to get a straight answer out of her.

Astronomers said Thursday they have spotted a hot bubble of gas spinning clockwise around the black hole at the centre of our galaxy at "mind blowing" speeds.

The detection of the bubble, which only survived for a few hours, is hoped to provide insight into how these invisible, insatiable, galactic monsters work.

US PGA Tour commissioner Jay Monahan says the idea of a peace deal with the LIV Golf Series is "off the table" as the sport's civil war deepens.

The upstart Saudi-backed series brought turmoil to golf this year by luring big-name PGA players with record purses of $25 million and guaranteed money for 54-hole events.

At least two more minors made pregnant by sexual assault were forced to leave Ohio to avoid having their rapists’ babies, according to sworn affidavits filed by abortion providers.


The affidavits were filed in Cincinnati as part of a lawsuit aimed at stopping enforcement of Ohio’s strict new abortion law, which it temporarily did last week. Originally paused for two weeks, on Tuesday the enforcement delay was extended to at least Oct. 14.