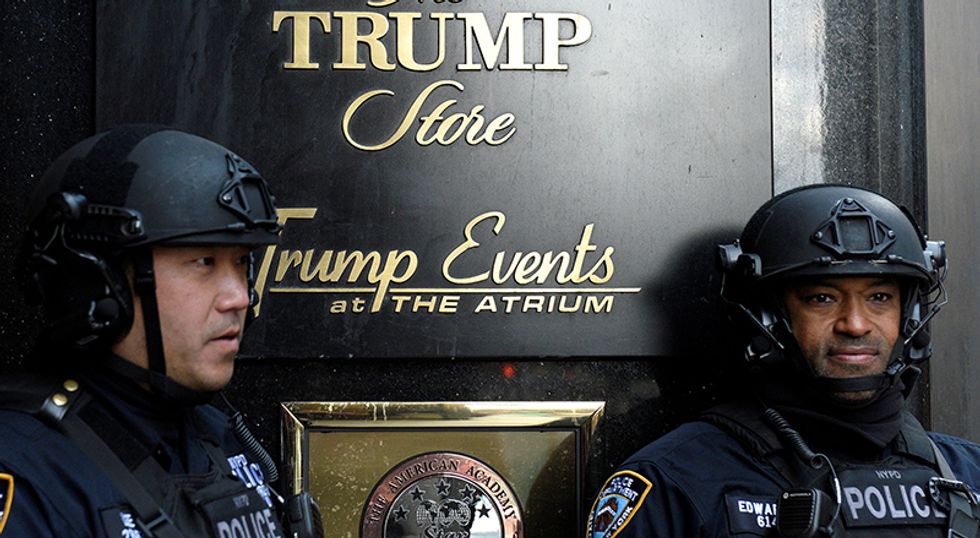 Steve Loomis, president of the Cleveland Police Patrolmen’s Association, had a blunt message for Donald Trump during a meeting in September: court-ordered reforms aimed at curbing police abuses in the midwestern city are not working.

Loomis and two other attendees said Trump seemed receptive to Loomis's concerns that federally monitored police reforms introduced during the Obama administration in some cities in response to complaints of police bias and abuse are ineffective and impose an onerous burden on police forces.

Trump, Loomis said, was “taken aback by the waste of money” when the union chief told him that federal monitors overseeing his city’s police department earned $250 an hour - a standard salary for the position.

"I think he’s going to have a more sensible approach to rising crime rates," Loomis said of now President Trump. "What I got from the meeting was that Donald Trump is going be a very strong supporter of law and order."

Emboldened by Trump's election, some of the country’s biggest police groups want to renegotiate "consent decrees" agreed to under President Barack Obama, the police labor groups said in interviews.

Consent decrees are agreements between a police force and the Justice Department that can prescribe changes to use of force, recruiting, training and discipline. They are enforced by a federal court with the oversight of court-appointed monitors. Currently 14 police departments, including Seattle and Miami, are operating under the decrees.

The police groups want to discuss the decrees with Jeff Sessions, Trump's designee for attorney general who has voiced criticism of them, although any renegotiation would be legally complicated because all parties as well as a federal judge must approve any changes.

“There are certainly decrees that are inartfully applied that we’d like to see revisited,” said Jim Pasco, the head of the Fraternal Order of Police, the nation’s largest police union with 330,000 members. It endorsed Trump in September and has worked with Sessions, a Republican senator from Alabama, for years while lobbying Congress for pro-police policies.

“We’ve always found him a man who’s willing to listen to alternatives to a previously charted course,” Pasco said of Sessions.

Civil rights groups are alarmed at the possibility that the decrees could be unraveled, saying they have been an important tool for the government to try to address issues like excessive use of force by police in Baltimore and an officer shooting in Ferguson, Missouri that led to nationwide protests.

Trump officials did not respond to multiple requests for comment on the meeting with Loomis.

While Trump has not publicly commented on consent decrees, he has expressed strong support for police departments and unions, and on Jan. 20 the White House said he wants to end the "dangerous anti-police atmosphere in America."

There have been questions by police and conservative politicians over the effectiveness of the consent decrees, which give the Justice Department power to obtain court orders imposing reforms on police forces that routinely violate civil rights through practices such as unlawful stops and seizures, racial discrimination, and illegal uses of force.

The federal program was authorized by Congress in 1994 in the aftermath of riots in Los Angeles sparked by the police beating of Rodney King.

Some police unions complain the decrees stigmatize police and impose overly restrictive limits on use of force. They also chafe at what they see as misguided federal prescriptions to local problems and have fought the reforms in court.

A reform agreement that the Justice Department negotiated with the New Orleans police department in 2013, for instance, has been “extraordinarily expensive” to implement, said Donovan Livaccari, the lawyer for the Louisiana Fraternal Order of Police. The city of New Orleans is footing the bill.

The Obama administration negotiated 24 reform agreements with law enforcement agencies during Obama's eight years in office after finding patterns of excessive force, racial bias, poor supervision and other issues, more than double the 11 agreements reached under the previous Bush administration.

Vanita Gupta, the last Obama-appointed head of the Justice Department's civil rights division, which investigates and recommends reforms for police departments, defended the use of consent decrees in an interview, saying they are apolitical ways of improving public safety and making policing more effective.

Bill Johnson, head of the National Association of Police Organizations, which represents about 241,000 officers, said he expects local police associations to examine existing consent decrees to see whether the Justice Department under Obama overstepped in imposing any measures.

Some police union officials say they have been encouraged by comments by Sessions, who has said that federal inquiries “smear” police departments and “undermine respect for officers.”

“Under Attorney General Sessions, it’ll be more, ‘Okay, there’s a problem, let’s craft an agreement as best we can and cure it, and then move onto the next thing’,” Johnson said.

Union officials said they expect the Trump administration to initiate and reach fewer binding reform agreements with police departments, and they hope Sessions will work with them to try to re-negotiate some of those existing agreements.

Sessions said in his confirmation hearing on Jan. 10 that he “wouldn’t commit that there wouldn’t be any changes” to existing consent decrees when he becomes attorney general if police departments show improvement before they have fully complied with the terms of the decree.

A Trump transition official said Sessions would not comment on his testimony until after the Senate votes on his appointment. That vote is not expected until February.

Not all union leaders agree that the decrees’ costs outweigh the benefits.

Sean Smoot, who directs the Police Benevolent & Protective Association of Illinois and serves as a monitor for the Cleveland police reform agreement, said the federal inquiries prompt cities to hire more cops and invest in better equipment.

The decrees have had mixed results. Reforms in some cities, such as Los Angeles, have resulted in higher public satisfaction with police and declines in reports of police use of force. In other places, such as Ferguson, the city has missed multiple deadlines for implementing reforms required by its decree.

Civil rights advocates in Chicago say that given Trump's law and order platform they fear his administration will neglect the Justice Department’s findings from a 13-month-long investigation into the police force.

But with Trump in the White House, “it’s not clear where the leverage is going to come from for the reforms,” said Jamie Kalven, founder of the Invisible Institute, a nonprofit group which advocates for police transparency.

The White House did not respond to a request for comment about Kalven's concerns.

Jonathan Smith, the Obama-appointed former chief of special litigation in the Justice Department’s Civil Rights Division, said he is confident that most agreements reached during the Obama era will remain intact because they are overseen by judges who are “committed to their implementation.”

In Cleveland, for instance, the judge who oversees the reform agreement that Loomis’s union is objecting to recently rejected any efforts to renegotiate it.