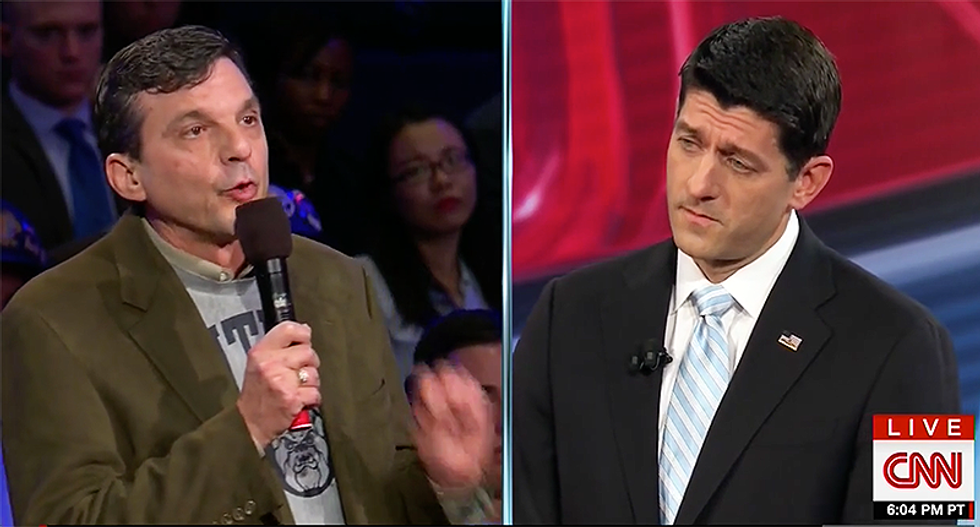 During the CNN town hall with Speaker of the House Rep. Paul Ryan (R-WI) a former Republican voter shared his story about working to elect Presidents Bush and Reagan but said he switched parties after Obamacare. The law, he said, his life.

Jeff Jeans told Ryan that he was initially opposed to the Affordable Care Act but not anymore.

"When it was passed, I told my wife we would close our business before I comply with this law," Jeans said. "Then at 49, I was given six weeks to live with a very curable type of cancer. We offered three times the cost of my treatments, which was rejected. They required an insurance card. Thanks to the Affordable Care Act, I'm standing here today alive."

The preexisting conditions portion of the Affordable Care Act was another thing he felt was important as a cancer survivor. He was shocked to hear that Ryan was in favor of repealing it.

"I want to thank President Obama from the bottom of my heart because I would be dead if it weren't for him," Jeans closed.

Ryan tried to claim that he wants to replace it with something better than what is there right now. For some, he said, the premiums increased. For others, the plan hurt businesses. For many, it isn't working.

Ryan never gave Jeans an answer for what will happen to the program and what the GOP plans to replace it with. He said, simply, that it would be "better."