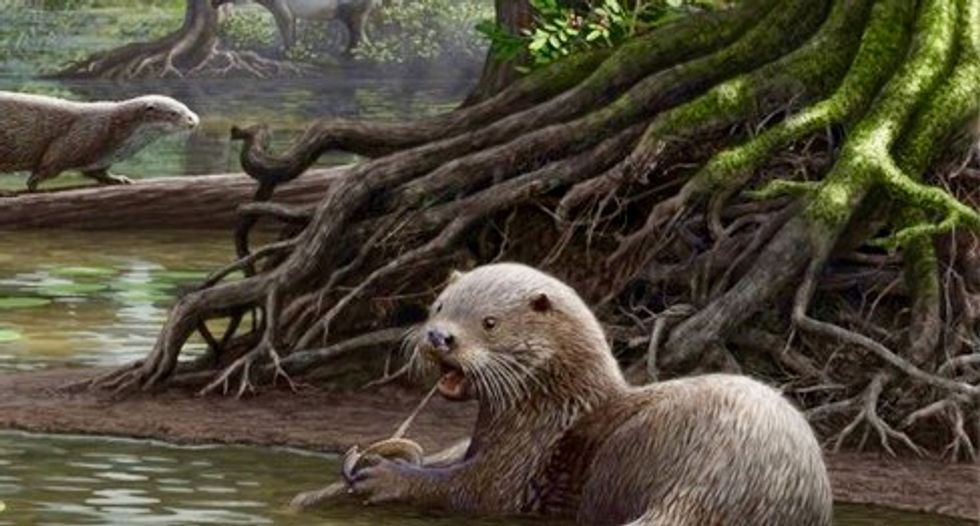 Two Siamogale melilutra individuals, one feeding on a fresh water clam, are pictured in this artist illustration handout image obtained by Reuters January 23, 2017. Scientists have unearthed fossils of an intriguingly large otter as big as a wolf that frolicked in rivers and lakes in a lush, warm and humid wetlands region in southwestern China about 6.2 million years ago. Mauricio Antón/Natural History Museum of Los Angeles County/Handout via REUTERS

Scientists have unearthed fossils of an intriguingly large otter as big as a wolf that frolicked in rivers and lakes in a lush, warm and humid wetlands region in southwestern China about 6.2 million years ago.

The outsized otter, called Siamogale melilutra, weighed about 110 pounds (50 kg) and measured up to 6-1/2 feet (2 meters) long, making it bigger than any of its cousins alive today, the researchers said on Monday.

"Siamogale melilutra reminds us, I think, of the diversity of life in the past and how many more questions there are still to answer. Who would have imagined a wolf-size otter?" said Denise Su, Cleveland Museum of Natural History curator of paleobotany and paleoecology.

It had enlarged cheek teeth and strong jaws that appear to have been used for crunching hard objects, perhaps large shellfish and freshwater mollusks, and was capable of swimming in shallow, swampy waters.

"I think it used its powerful jaws to crush hard clams for food, somewhat like modern sea otters, although the latter use stone tools to smash shells," said Xiaoming Wang, head of vertebrate paleontology at the Natural History Museum of Los Angeles County.

"If Siamogale melilutra was not smart enough to figure out tools, perhaps the only option left was to develop more powerful jaws by increasing body size," Wang added.

The fossils, found at a site in China's Yunnan Province, include a largely complete cranium and lower jaw, various teeth, and limb bones.

The skull was crushed eons ago during the fossilization process. The researchers used sophisticated scanning to digitally reconstruct it, discovering it boasted a mix of otter-like and badger-like skull and dental traits.

There was intense interest in the fossil site because an important prehistoric ape skull previously had been unearthed there. Others fossils found include elephants, rhinos, tapirs, deer, beavers, crocodiles and water birds including ducks, swans and cranes.

The largest otter alive today is the South American giant river otter, weighing up to about 70 pounds (32 kg). Otters belong to a mammalian family including the weasel, badger, marten and mink. The earliest-known otter lived about 18 million years ago. But otter evolution is not well understood, with fossils rare and scattered around the world.

Siamogale melilutra may not be the largest otter ever, with fossils of another one that may be the biggest previously found in Africa.

The research was published in the Journal of Systematic Palaeontology.