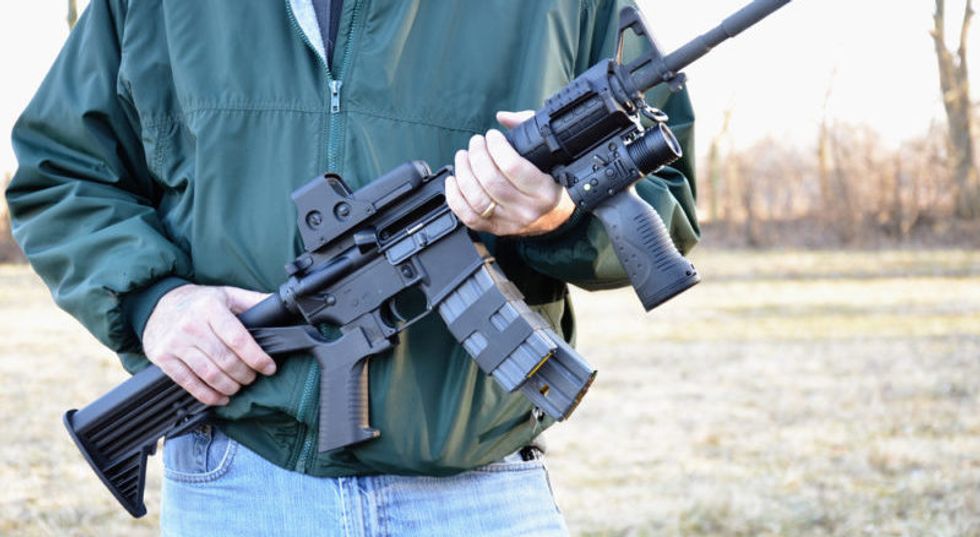 Gun rights advocates have sued Massachusetts over the state's ban on assault weapons, saying that a crackdown begun last year on "copycat" assault rifles is a vague and unconstitutional violation of gun ownership rights.

The lawsuit, filed in federal court late Monday, challenges a 1998 state law banning rifles including the AR-15 and AK-47 and a July 2016 directive by the states attorney general banning guns that are similar in function but have been slightly modified to meet state requirements, such as by replacing folding stocks with fixed models or removing flash suppressors.

The group of gun owners, dealers and the state's Gun Owners Action League, who have the backing of the National Rifle Association, said the July decision by Attorney General Maura Healey banned guns that had been purchased legally in the state over the past two decades and infringed on the right to bear arms protected by the Second Amendment of the U.S. Constitution.

"Massachusetts prohibits firearms it pejoratively defines as 'assault weapons,' which is a non-technical, entirely fabricated, and political term of uncertain definition and scope," the 33-page lawsuit contends.

It said that 1.2 million such weapons were sold across the United States in 2014 and that that type of firearm represented 20 percent of U.S. gun sales in 2012.

The suit asks a federal judge to overturn the 1998 state law and to block the state from enforcing its July ban on "copies or duplicates" of assault rifles.

"The assault weapons ban keeps dangerous, military-style weapons off our streets," said Jillian Fennimore, a Healey spokeswoman. "We will vigorously defend the law and continue our enforcement efforts."

Gun rights are a hotly debated issue in the United States. Advocates for years have succeeded in fighting off attempts to restrict weapons possession on the federal level, contending that access to a wide range of weapons is needed for personal protection, hunting and shooting sports.

Gun-control advocates, who highlight the guns' use in mass shootings at places such as schools and nightclubs, have responded by focusing their efforts on promoting new restrictions at the state level.

Liberal-leaning Massachusetts has some of the strictest gun regulations in the country.

"We are drawing a line in the sand where Massachusetts' gun control agenda tramples the fundamental individual right to defend oneself and family in the home," James Wallace, executive director of the Gun Owners' Action League, said in a statement.