Historian explains the many reasons Martin Luther King Jr. would be appalled by Donald Trump 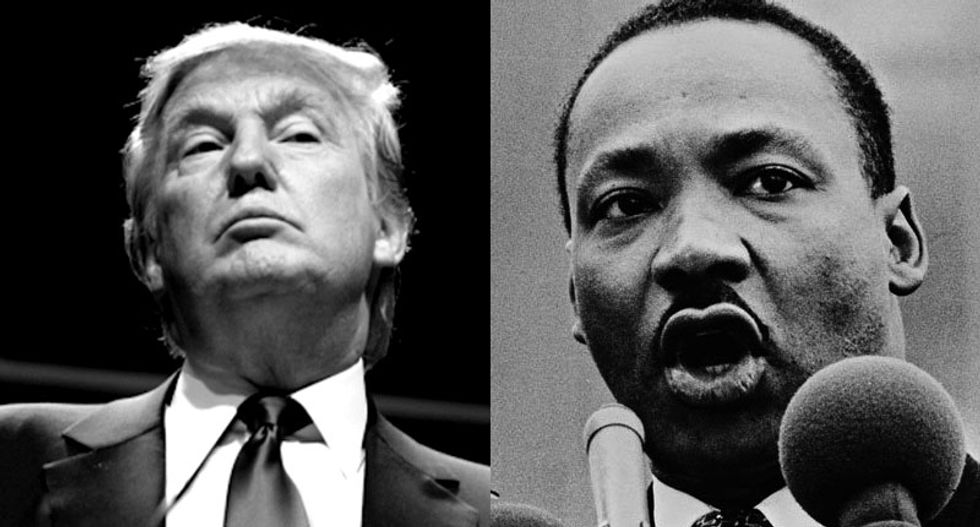 As Donald Trump prepares for his inauguration on Friday, a poignant anniversary arrives: Martin Luther King Jr.’s birthday. Since 1986, the US has annually remembered King with a federal holiday, on the third Monday in January. King’s dream usually takes pride of place, a dream he encapsulated in the words, “I have a dream that my four little children will one day live in a nation where they will not be judged by the color of their skin but by the content of their character.”

Born on 15 January 1929, King would be 88 had he not been assassinated in 1968. If alive today, King would have been appalled by Trump’s conduct during last year’s US election. Trump suggested that his opponent, Hillary Clinton, could be assassinated, threatened to jail her, and refused to respect the result of the election, unless he won. These were profoundly undemocratic statements.

King would also have been deeply disturbed by the election’s outcome. Trump won, even though Clinton won nearly 2.9 million more votes and but for an historical anomaly, the Electoral College, would be president. America elected the anti-King. Trump judges people by the color of their skin and his character is devoid of content.

King urged Americans to conquer “the giant triplets of racism, materialism, and militarism.” Yet on each point, Trump and King are opposed. Trump stoked racism with his vilification of Mexicans during the election. His proposed wall across the US’s southern border tramples on King’s legacy. King often used the metaphor of a “world house” to describe the world he envisaged. Humanity, he said, had inherited “a great ‘world house’ in which we have to live together – black and white, Easterner and Westerner, Gentile and Jew, Catholic and Protestant, Moslem and Hindu.” Trump’s vilification of Muslims and his rampant sexism chiselled at the foundations of the “world house.”

Trump’s racism, however, was not new. In 1973, the federal government filed a lawsuit against Trump Management Inc., for violating the Fair Housing Act of 1968. Passed a week after King’s murder, it is one of the great pieces of civil rights legislation and was designed to eliminate racial segregation in housing, not just in the South but also in the North. Yet, it had been common practice for Trump Village to reject African American renters.

More recently, Trump has fostered links to the so-called Alt-Right, typified by Steve Bannon, which is hostile to the civil rights movement’s legacy. Likewise, Trump’s nominee for Attorney General, Jeff Sessions, threatens to subvert the Civil Rights Division of the Justice Department, the agency responsible for the enforcement of civil rights based on not only race, but also gender.

Trump also championed the “birther” movement against Obama, falsely raising doubts about whether America’s first black president was born in the US. It was a racist tactic, especially in a nation founded on the principle that black slaves were only three-fifths a person and for whom, due to slavery, birth certificates were often a rarity.

Unlike Trump, King eschewed materialism. He refused to accumulate any personal wealth and deplored crass materialism, which is a Trump specialty. The President-elect's selection of a billionaire cabinet flies in the face of King’s scorn for rampant capitalism. Further, economic inequality aided Trump in his quest for the presidency. America’s poor are desperate and without his fortune Trump would have been unable to mount such an independent and subversive campaign. He would have been just another anonymous crank without a platform.

Differences between King and Trump on the issue of militarism are also stark. King supported nuclear disarmament, whereas Trump wants to restock the nuclear arsenal and bizarrely wants Russia to do likewise. Trump is also fond of dictators, such as Putin. The president-elect’s opposition to gun control will ensure the continued murder of Americans by Americans.

Even though Trump would likely claim an affinity with King, the two are the antithesis of each other. One gave his life in the quest to make America more democratic, the other perverts democracy while looking longingly to a past when America was great, but southern African Americans could not vote. One was assassinated by a white supremacist, the other gives aid and comfort to white supremacists. One denounced wealth, the other embraced profit like a drug. One denounced violence, the other threatens global peace.

Whether Trump becomes the appalling president he threatens to be, remains to be seen. But regardless, his election is a stain on American democracy and a setback for those who, like King, seek a more democratic nation.

Daniel Thomas Fleming, PhD, wrote his dissertation on “Living the Dream": A History of the Martin Luther King Jr. Federal Holiday. He graduated from the University of Newcastle Australia.