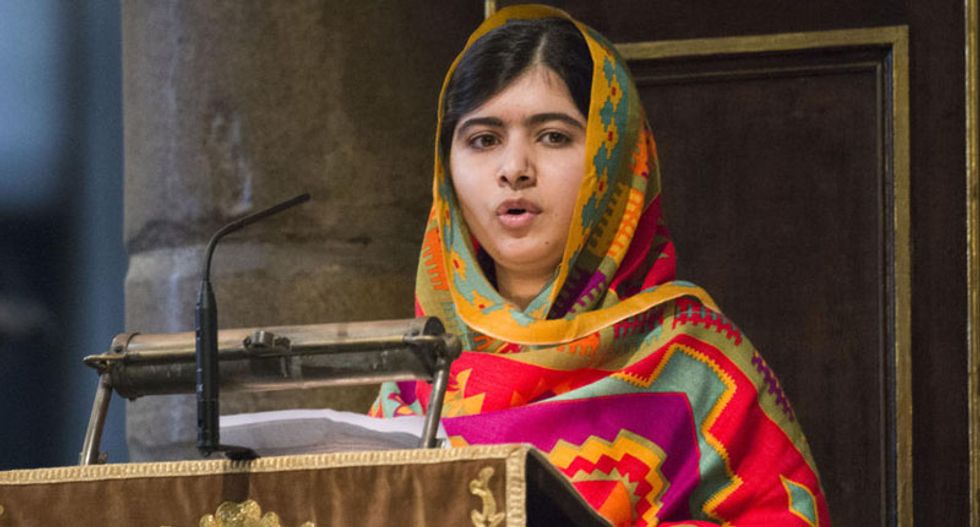 Pakistani schoolgirl Malala Yousafzai -- who survived being shot in the head by the Taliban -- addresses the congregation at Westminster Abbey in London on March 10, 2014 (AFP Photo/Arthur Edwards)

After President Donald Trump signed an executive order on Friday that would enact the "extreme vetting" of Muslim refugees in an effort "to keep radical Islamic terrorists out," Malala Yousafzai issued a powerful statement.

Trump's order promised to give special priority to Christian refugees, and his order has been criticized by the Intercept as a policy of "If we bombed you, we ban you."

Yousafzai, the youngest person to win the Nobel Peace Prize wrote in a statement, "I am heartbroken that today President Trump is closing the door on children, mothers and fathers fleeing violence and war."

"I am heartbroken that Syrian refugee children, who have suffered through six years of war by no fault of their own, are singled-out for discrimination," she continued. Pulling from the personal experience of her friend Zaynab, who Yousafzai explained had "fled wars in three countries ... before she was even 17," she wrote that she was heartbroken for girls in particular.

Yousafzai urged the president to rethink his stance toward Muslim refugees, writing, "In this time of uncertainty and unrest around the world, I ask President Trump not to turn his back on the world’s most defenseless children and families."

You can read the statement in full here.