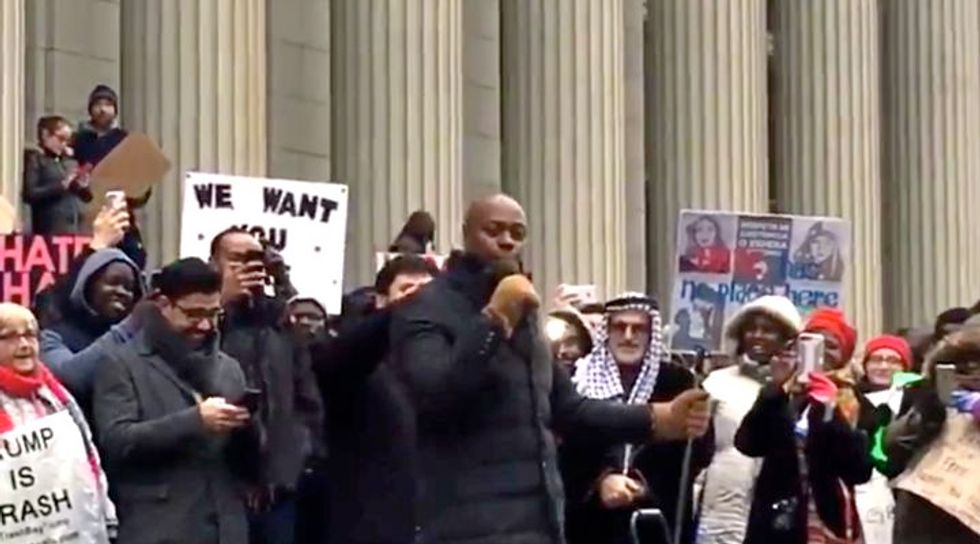 “Donald Trump, wherever you are: Please stop ruining my Sundays,” Chappelle said at a weekend rally in Dayton, Ohio.

“It’s freezing here,” the comedian continued. “But we are all here because what you [Trump] are doing does not seem right.”

Chappelle, who converted to Islam in 1998, hosted the first Saturday Night Live after Trump’s election, delivering an iconic monologue about Hillary Clinton, Black Lives Matter and of course, then president-elect Trump.

Reminiscing about a White House/BET function celebrating black entertainers, Chappelle told the audience how important it was for the “historically disenfranchised” to feel welcome by then-president Obama.

“[The White House event] made me feel proud to be an American and it made me very happy about the prospects of our country. So, in that spirit, I’m wishing Donald Trump luck. And I’m going to give him a chance. And we, the historically disenfranchised, demand that he give us one too.”

Now, it appears Chappelle is lending his voice to another group of historically disenfranchised people, speaking out on behalf of immigrants and Muslims impacted by Trump’s executive order.

“As a matter of fact, it sucks,” Chappelle told rally-goers, referring to the travel ban. “I support refugees, I support immigrants, and I love my friends and neighbors. Thank you.”

S/o to Dave Chappelle for always supporting our community here. We're honored you're from here and to call you one of our own. #nomuslimban pic.twitter.com/6o3Iplsxe9

...and then Dave Chappelle showed up pic.twitter.com/d4jwYejaUh