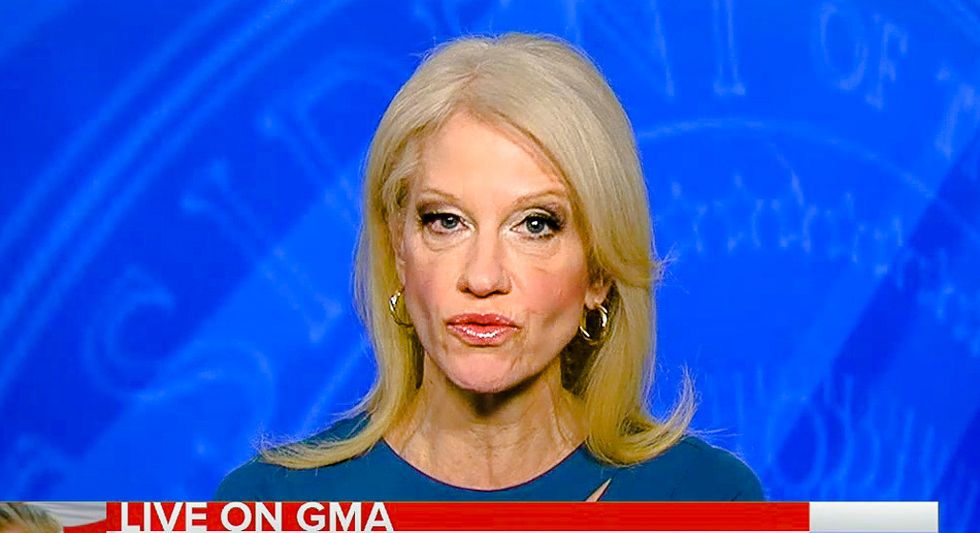 Kellyanne Conway, a top adviser to Donald Trump, on Monday said that the president's first week in office was nothing short of "breathtaking."

Following a week of executive orders that culminated in massive protests against a so-called "Muslim ban," Conway defended her boss during an interview with Good Morning America host George Stephanopoulos.

"I see all these protesters," Conway remarked. "I think if you actually surveyed them, they would probably get the facts wrong. They're being misinformed."

Stephanopoulos pointed out that Trump had referenced the terrorist attacks of September 11, 2001 in his executive order banning travel from seven Muslim countries.

"None of the deadly terror attacks in this country since 9/11 have been carried by anyone from those seven countries," the host noted. "Eighteen of the 19 9/11 attackers came from Egypt, Saudi Arabia, the United Arab Emirates -- there is no ban from that country. Those countries also happen to be countries where President Trump has significant business interests."

Conway suggested that Trump was following the lead of President Barack Obama's six month ban on the Iraqi refugee program, a comparison that was refuted in a recent Washington Post fact check.

The Trump aide also lashed out at Stephanopoulos, who she accused of "cherry picking" Trump's tweets.

"I mean, Donald Trump has been on the job for, what, eight, nine, ten days. Barack Obama was here for eight years," Conway opined. "The extraordinary accomplishments in just the first week truly are breathtaking."

"No reductive curating reporting, in my view, is helpful to the American public to understand," she added. "We're being very collaborative and very open. We would just like the same in return."