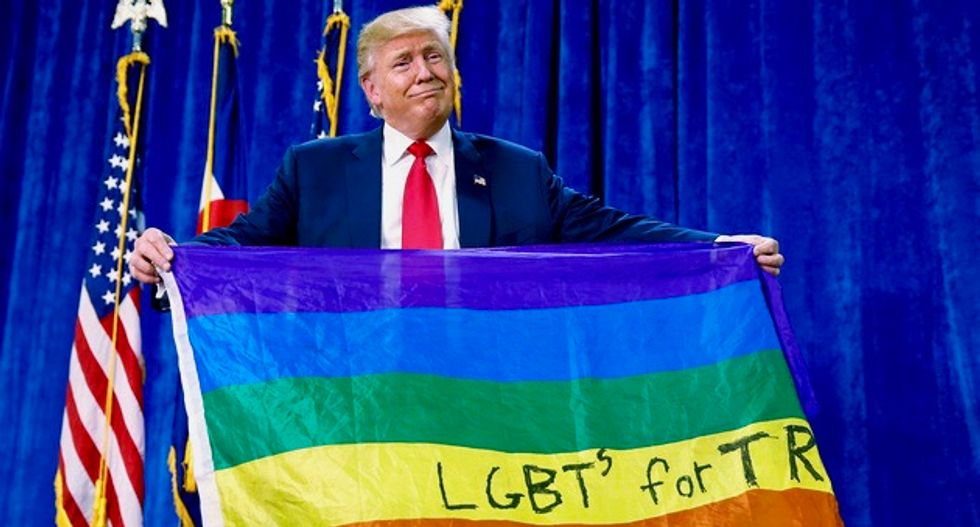 Donald Trump holds up a rainbow flag with "LGBTs for TRUMP" written on it at a campaign rally in Greeley, Colorado, October 2016. REUTERS/Carlo Allegri

Advocates said on Tuesday they were bracing for moves by U.S. President Donald Trump's administration to roll back lesbian, gay, bisexual and transgender equality, despite a White House statement vowing to uphold protection for LGBT people in the workplace.Trump will continue to enforce a 2014 executive order by his Democratic predecessor, Barack Obama, barring discrimination against lesbian, gay, bisexual and transgender people working for federal contractors, the White House said.

The statement marked a break with the Republican party's traditional stance on gay rights, but advocates said they feared Trump could still take executive actions that would allow discrimination under the guise of religious exemptions.

Enforcing the 2014 order puts Trump at odds with many fellow Republicans, who for the most part have fought civil rights protections based on sexual orientation and gender identity. Some conservatives have softened their positions in recent years, however, particularly toward gay marriage.

"The President is proud to have been the first ever GOP (Republican) nominee to mention the LGBTQ community in his nomination acceptance speech, pledging then to protect the community from violence and oppression," the White House said in its statement.

During his presidential campaign, Trump had acknowledged gay rights and called on LGBT voters to cast their ballots for him.

But by picking Indiana Governor Mike Pence, a staunch conservative Christian, as his vice president, as well as other senior officials who oppose gay rights, Trump has sent a clear message to the community, said Chad Griffin, president of Human Rights Campaign, the nation's largest lesbian, gay, bisexual, transgender and queer advocacy organization.

"Trump talks a big game on his support for LGBTQ people, yet he has filled his cabinet with people who have literally spent their careers working to demonize us and limit our rights," he said in a statement. "Claiming ally status for not overturning the progress of your predecessor is a rather low bar."

The White House statement came as Trump prepares to name his choice to fill the vacancy on the U.S. Supreme Court left by the death last year of Antonin Scalia.

Trump's nominee, scheduled to be announced at 8 p.m. ET on Tuesday (0100 GMT on Wednesday), will likely be influential on a number of issues including religious rights as well as gay and transgender rights.

In a 2015 interview with MSNBC, Trump indicated that the Supreme Court's ruling allowing gay marriage should stand.

Trump's nominee pick will be especially revealing about his stance on equality, said Shannon Minter, legal director for the National Center for Lesbian Rights.

"Whoever is in that seat is going to have a huge impact," Minter said. "It is so critical that the Senate not confirm any nominee who is going to roll back the clock on LGBT equality."

Trump's pick for attorney general, Republican U.S. Senator Jeff Sessions, has pledged to enforce laws upheld by the Supreme Court, even those he disagreed with, such as decisions making abortion and same-sex marriage legal.