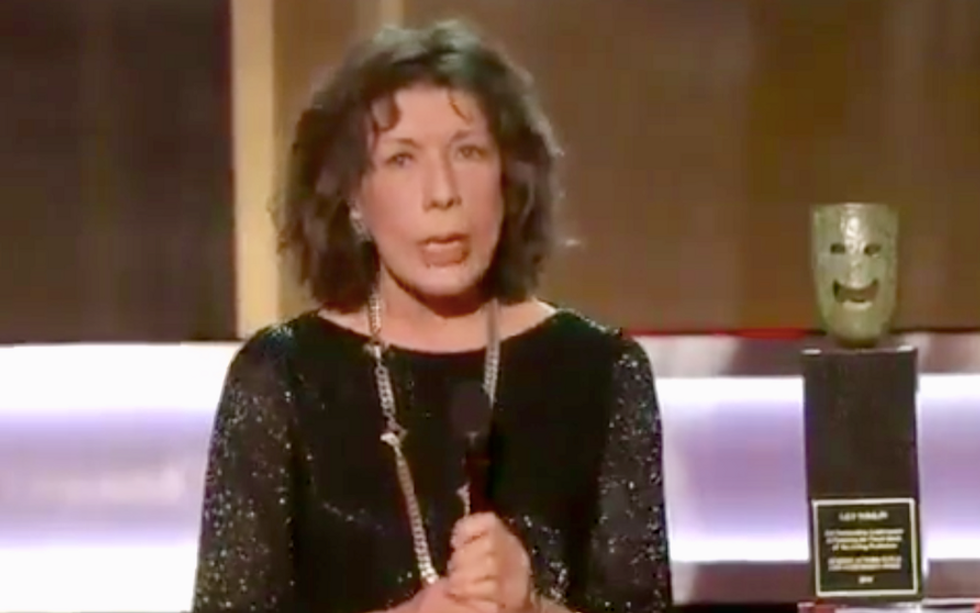 "Did you hear? The Doomsday Clock has been moved to two and half minutes before midnight?" Tomlin said. "And this award, it came just in the nick of time."

"When the great Ruth Gordon received an Oscar for the first time at 72, she said, 'I can't tell you how encouraging a thing like this could be,'" Tomlin said. "Wait a minute. I've realized I'm older than Ruth Gordon was at that point."

She said that with the joy of this kind of lifetime award comes a kind of sadness, that now looking back she wishes she'd done "so much more" to earn it.

"I wasted a lot of time being ambitious about all the wrong things," she confessed.

"Now, after 50 years in the business, I find young actors are asking me for sage advice hoping for nuggets of wisdom," she said. "So along with telling them to wear sunscreen, I suggest a few other things I think you may find helpful."

"Don't leave your house when you're drunk," she counseled. "If you're already out there, you must learn to tell when you've had too much to drink. Listen to your friends. When they stop talking to you and start talking about you, saying things like, 'Did she have a purse?'"

On the way, she obliquely dinged the Trump administration, saying, "Live your life so when you are being honored for your achievements, the people called upon to make laudatory remarks can feel reasonably honest about their comments. Otherwise, in these times, all their words of praise might be perceived as 'alternative facts' or, worse yet, 'fake news.'"

She thanked her partner Jane Wagner and everyone in the theater.

"What sign should I make for the next march?" she asked the crowd before saying, "I'm so glad this speech is almost over. And we could all go out and really change things."