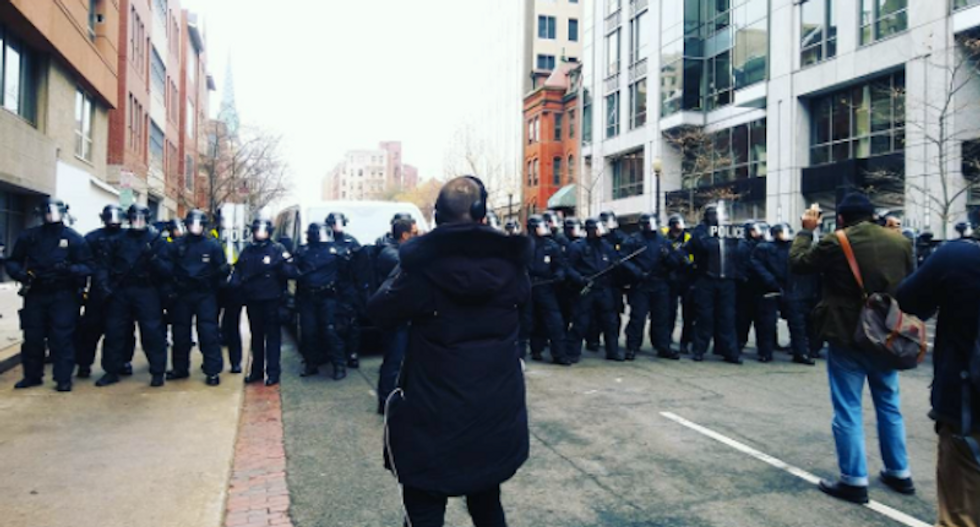 President Donald Trump's administration was quick to take action on inauguration day on a number of issues that defined his campaign. The Trump team published its law enforcement plans in a White House document titled, "Standing Up For Our Law Enforcement Community." Law-and-order and the "Blue Lives Matter" rhetoric were central to Trump's campaign, making this initiative unsurprising, but no less alarming.

Following suit with the Trump administration's law enforcement platform, police in Acadiana, Louisiana have used the state's new "Blue Lives Matter" law. Louisiana is the first state to enact such a law, which aims to protect the conduct of police officers by slamming people who resist arrest with hate crime charges.

"We don't need the general public being murdered for no reason and we don't need officers being murdered for no reason. We all need to just work together," said the St. Martinville Police Chief, Calder Hebert in defense of the new law. "Resisting an officer or battery of a police officer was just that charge, simply. But now, Governor Edwards, in the legislation, made it a hate crime now."

CBS News correspondent David Begnaud clarified on Twitter that the police chief's language was inaccurate, according to Louisiana Gov. John Bel Edwards' communications director. However, the Blue Lives Matter provision has already been used to charge someone with a hate crime.

If the response to protesters at Donald Trump's inauguration is any indication of what's to come from police, any Blue Lives Matter law that seeks to slap felony hate crime charges on people for resisting arrest is just another component of a serious crackdown on dissent.

Based on Louisiana's Blue Lives Matter law, anyone who resists arrest or uses physical force against an officer can now be charged with a felony hate crime, a serious offense that will only further criminalize those most affected by abusive policing. Hate crimes are punishable by ten years to life in prison.

According to KATC, if someone was arrested for petty crime and minor offenses, resisting arrest can lead to a serious charge. "We need the police and the public to work together. The policemen have a job," Hebert said. "The public has the job of helping the police. And if someone happens to be involved in criminal activity. Let the courts handle it. Don't resist physically."

However, repressive policing tactics and heavy charges are unlikely to create a sense of trust between police and the communities that are most often targeted by them.

Even so, Hebert offered a message to police departments across the United States. "Hopefully, the rest of the nation follows suit," he said.