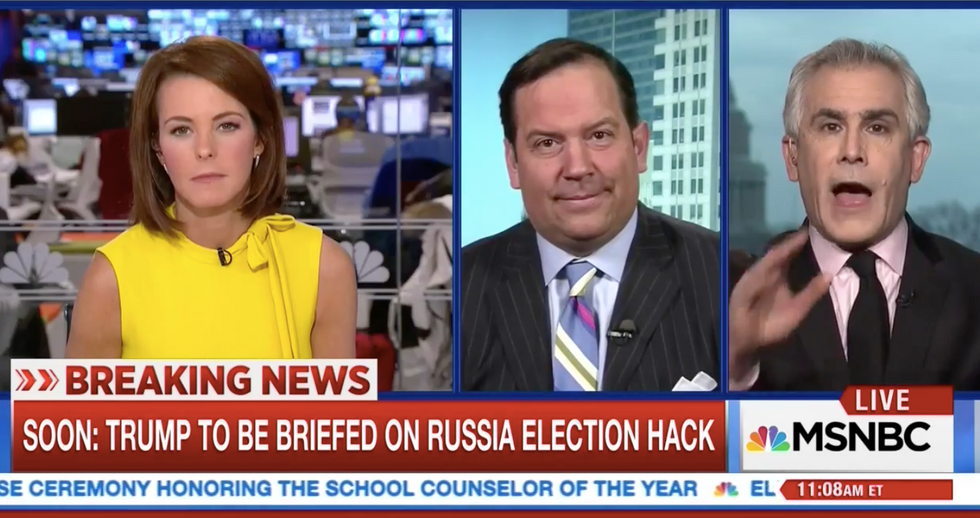 MSNBC anchor Stephanie Ruhle brought her foot down hard on a panel discussion that got out of hand on Saturday.

Mediaite.com reported that Donald Trump surrogate Steve Cortes and Mother Jones editor David Corn squared off on the topic of Republican President-elect Trump's many conflicting statements regarding Russian interference in the 2016 election.

"I pity you, Steve, having to defend Donald Trump on this matter," said Corn. "He's said so many things that are outright false. Not that he's a skeptic, that's a polite way of putting it. He said weeks ago that this wasn't an issue before the election, that no one knew about this before the election. Why are we raising this issue now?"

"When in fact," he continued, "the ONDI and DHS -- you can look up those initials and find out what they are -- had put out a statement in October..."

Cortes burst in, interrupting. Corn tried to talk over him, saying, "I didn't interrupt you" repeatedly.

"I'm not going to sit here and let you condescend to me that way!" blustered Cortes.

"Gentlemen!" interjected Ruhle. "We're going to end this right now if you can't be respectful to one another."

Corn went on to say that Trump lied when he said the hacking was a post-election issue because of the letter from U.S. intelligence agencies that was issued in October proves that it was already on the table as a concern.

"He said that he knew something 'special' about the hacking that he would tell us this past Tuesday and Wednesday," Corn said. "He didn't do that either. He has been spinning or fabricating or saying false and misleading statements on this issue for months and it all ties into the mystifying approach he has toward Russia and Putin."

"What's false to me," Cortes said, "is that the mainstream media has been saying for weeks that the election was hacked. The DNC was hacked."

"And the public believes that actual vote tallies were hacked by Russia," Cortes said, the blame for which he laid at the feet of the media.

"But," she went on, "in terms of this special information that Donald Trump has, what is it?"

"I don't know," Cortes admitted. "Clearly, nobody knows," to which Corn responded with an abrupt, "Ha!"