Rev. Al Sharpton schools 'Fox and Friends' hosts who mocked him for calling Jesus a refugee 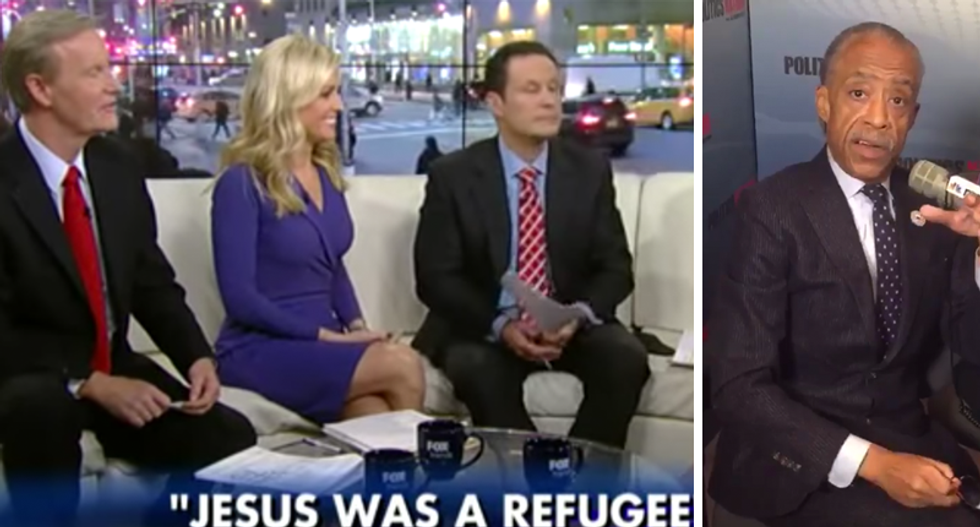 The Fox and Friends hosts on Tuesday found a novel way to make fun of the Rev. Al Sharpton, using random Twitter posts to slam the civil rights activist for accurately referring to Jesus as a refugee.

“This morning a social media firestorm set off by the Rev. Al Sharpton after he slammed President Trump's border order by calling Jesus a refugee,” co-host Steve Doocy said on Fox and Friends. “Well that's not exactly accurate is it?”

Doocey was referring to a post by Sharpton, who slammed President Donald Trump’s executive order on immigration Sunday, tweeting, “Before you head to church today, remember to thank God for his son, Jesus a refugee who fled to Egypt.”

“Well, according to the bible it's really not,” Fox’s Carley Shimkus said, referring to Sharpton’s tweet. “And a lot of people on social media had something to say about that.”

Shimkus then read out two seemingly random Twitter users’ insistence that Jesus was not a refugee before hitting Sharpton for failing to pay his taxes.

“He’s a reverend, though!” Brian Kilmeade “Who gave him his git certificate to be a reverend?”

After Shimkus said the reverend gets an “E” for effort, the cast posited that the Rev. Al Sharpton was ordained online.

Sharpton took to Twitter Tuesday afternoon to defend his position that Jesus was a refugee: