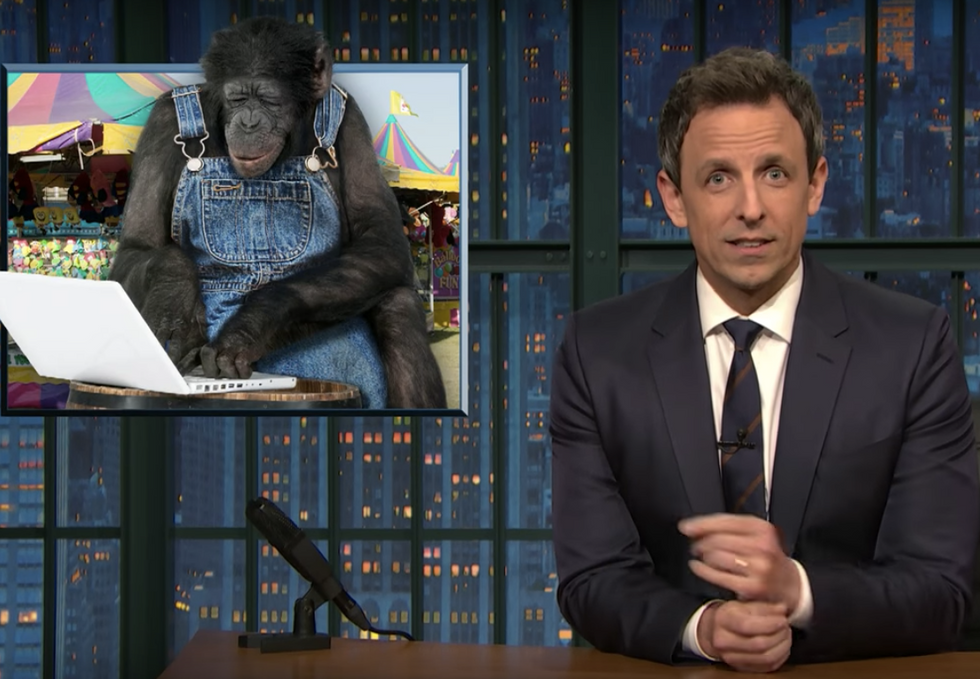 Seth Meyers returned from his New Year's hiatus to blast Donald Trump and his habit of tweeting about "the most inconsequential things" as a means of distracting the public from issues like his cozy relationship with Russian Pres. Vladimir Putin.

Meyers pointed to an episode of Fox and Friends where top Trump aide Kellyanne Conway learned live on the air that her boss was tweeting about Arnold Schwarzenegger's ratings on The Apprentice.

"There'll be another one coming up, yeah," Conway said. "He's typing, well, good for him."

"'He's typing good for him?'" Meyers repeated. "She talks about him like he's a monkey at the state fair, 'He's typing!'"

"Trump's impulsive stream of consciousness tweets might seem embarrassing for an incoming president but Trump is apparently proud of his Twitter presence," Meyers said, pointing to a Washington Post report that friends and aides call Trump "the Ernest Hemingway of Twitter."

“Seriously," Meyers quipped, "if Ernest Hemingway heard you say that, he would kill himself again.”

The only question of consequence regarding Trump's Twitter use is whether they're a “calculated distraction" from issues like Russian hacking and Vladimir Putin's involvement in the 2016 U.S. election or "the ramblings of an unhinged narcissist.”