Shep Smith scorches Trump for betraying US spies: 'Is it a thank you to Russia for all their help?' 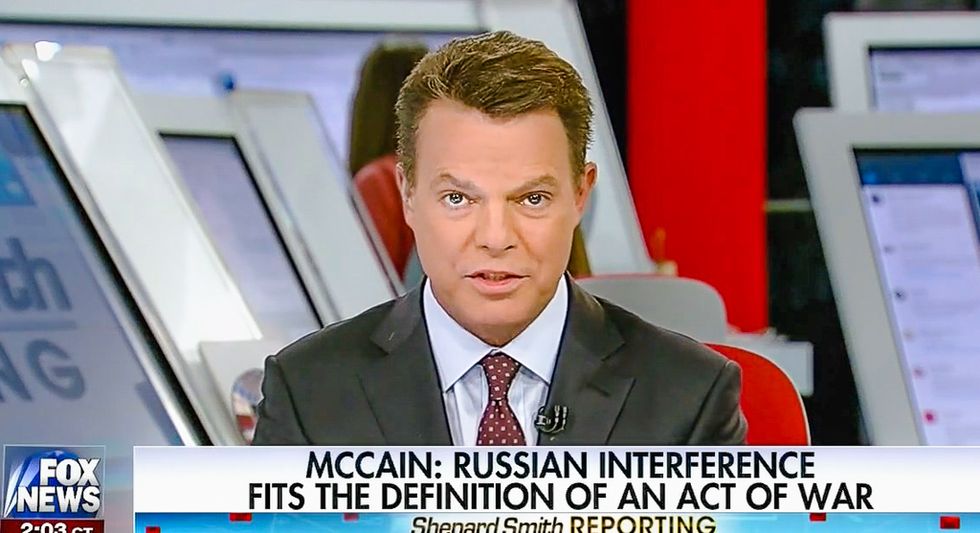 Fox News host Shepard Smith said that President-elect Donald Trump's refusal to acknowledge cyber attacks on the U.S. election was either a troubling distrust of U.S. intelligence agencies or "a thank you to Russia for all their help."

During his Thursday program, Smith summed up testimony from Director of National Intelligence James Clapper by saying that there was "no doubt -- none -- that Russia interfered America's election."

"There were lots of ways Russia tried to sway our vote," he continued. "He testified that Russia used cyber attacks to target the Democratic National Committee -- we know that. He said they also used propaganda and disinformation, including fake news. Fake news that the Kremlin commissioned and generated. In other words, a pack of lies packaged up as news of the day in an effort to saw the minds of the American electorate."

"We don't need a dictionary to figure out what he's saying," Smith insisted. "He's saying, 'Putin knew this, Putin directed this. This is all about Putin.'"

The Fox News host agreed with Clapper's assertion that Trump "disparaged" the U.S. intelligence community by siding with Russia, WikiLeaks and Julian Assange.

"The president-elect is with Julian Assange, who if he walked out the door would be arrested," Smith said, "over the $62 billion a year American intelligence agencies and all their leaders."

"And then today, Trump said he's a big fan of 'intelligence,'" Smith noted. "Apparently not this intelligence. He's made that clear. Because this intelligence says that Vladimir Putin and the Russians tried meddling with the U.S. election to help him, Donald Trump, get elected."

"But why? Does Donald Trump not trust the intelligence agencies? Or is this a thank you to the Russians for all their help? We do not know. But it's one of those."